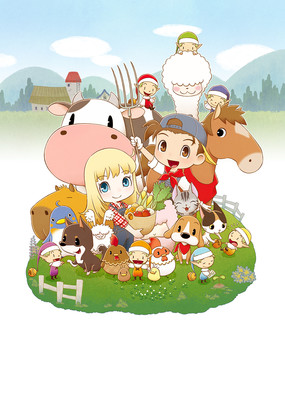 XSEED Games announced at the PC Gaming Show 2020 online event on Saturday that it will release Marvelous’ Story of Seasons: Friends of Mineral Town (Bokuj? Monogatari: Saikai no Mineral Town) game for PC on July 14, simultaneously with its release for the Nintendo Switch in North America.

The game will be the first in the main Story of Seasons series to launch for Switch and PC. The PC release will have eight language options, resolution up to 4K, various graphics options, and keyboard and mouse controls.

The game is available for pre-order now, and people who pre-order the physical version from the XSEED Games Store will receive a “Strawberry Hanako” pocket plushie inspired by the in-game Strawberry Cow. Pre-orders for the digital version will include a Cow Costume DLC, which will also be available to purchase separately after the game’s launch.

Natsume published most of the previous games in the franchise under the umbrella title of Harvest Moon in North America. However, since XSEED Games — Marvelous AQL’s own subsidiary — published the Bokuj? Monogatari: Tsunagaru Shin Tenchi game in North America in March 2015, it cannot use Natsume’s Harvest Moon title.

Bandai Namco Entertainment released the Doraemon: Story of Seasons (Doraemon: Nobita no Bokuj? Monogatari) crossover game for the Switch and PC via Steam in the West on October 11. The game launched in Japan for the Switch last June. A PlayStation 4 version will debut in Japan on July 30 and in the Americas on September 4.