Accueil Sports Billy Sharp: ‘My emotions showed when I got that first Premier League...

Billy Sharp remembers how the travelling Sheffield United fans were “rolling down the stand, trying to get to me”, utterly lost in the euphoria of the moment. There is no feeling quite like the one that accompanies a vital last-gasp goal and, on the face of it, Sharp’s 88th-minute equaliser at Bournemouth last August had it all.

It was the day of Sheffield United’s Premier League return, their first game in the top division since 2006‑07 and Sharp, the Sheffield boy and lifelong Blades fan, the captain and one of the symbols of the club, had saved the day just six minutes after coming on as a substitute. But there was even more to it than that.

The 34-year-old striker remembers how he had felt in the early months of 2012, having joined Premier League-bound Southampton from Doncaster during the mid-season window. He had the most serious issue imaginable on his mind, having lived the worst nightmare of every parent the previous October when his baby son, Luey, died of gastroschisis. Luey was two days old.

On the field, Sharp had a dream and it was to score a goal in the Premier League. Just one and he would be happy. Southampton were duly promoted and Sharp had his shot in 2012-13. Yet it was gone in the blink of an eye. After two non-scoring substitute appearances, he was loaned to Nottingham Forest.

The following season, there would be further Championship loans to Reading and back at Doncaster and then a permanent move to Leeds before he dropped down to League One to rejoin Sheffield United, where he had previously enjoyed two spells.

At that point – in 2015 – the prospect of scoring in the top flight had to feel outlandish. But Sharp is the ultimate fighter and, like his club, who have lit up the Premier League this season, he is not interested in what other people feel is realistic.

“I remember saying that [one Premier League goal would do him] – it may have been with what I was going through at the time” Sharp says. “But I’ve worked hard to get back since the Premier League chance went away from me at Southampton. There’s no better club to do it at than Sheffield United and my emotions showed when I managed to get that first Premier League goal. I had to get my opportunity with Sheffield United by getting promoted twice but I’ve always believed I can score goals at this level. 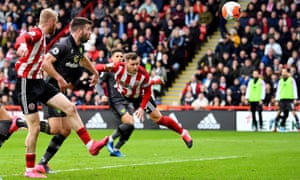 Billy Sharp scores Sheffield United’s winner against Norwich in what turned out to be their final Premier League match before lockdown. Photograph: Dylan Martínez/.

“I’ve got a photo up in my house of the Bournemouth celebration. I’ve got my arms wide, a big smile on my face and I’m running over to the Sheffield United fans with the lads behind me. It’s a great photo to show what that result meant to us as a club.”

Sheffield United have had so many great moments since then. Sharp highlights the 2-2 draw at Chelsea in the fourth Premier League game as the point at which they thought they could handle the elevated company and, when they kick off Project Restart on Wednesday – at Aston Villa – they will know that a win would take them fifth.

Champions League qualification is within their reach and this for a newly promoted club with one of the smallest budgets in the division who have never before made it to Europe. It is simply not supposed to happen but it has done because of the tactical cohesion instilled by Chris Wilder, their defensive excellence – only Liverpool have conceded fewer – and their indomitable spirit.

The club’s previous trip to Villa Park was last season in the Championship and it saw Sharp give his team a 3-0 lead with a hat-trick. Unfortunately for them, they would concede three times late on to draw 3-3, which was the prompt for a heated dressing-room inquest. Sharp missed it as he was on post-match media duties.

“I got back and it was so quiet” Sharp says. “I was thinking: ‘What the hell’s going on?’ I started to express my feelings and the gaffer put me in my place. He said: ‘Sit down, shut up, everything’s been said.’ But that was a turning point. We kept seven clean sheets on the spin and only lost one in the next 15, which got us over the line to promotion.”

The Fiver: sign up and get our daily football email

Wilder’s man-management has been central to the journey and one piece of it has entered Blades folklore. It came after game five of his reign – a League One defeat at Millwall in August 2016, which left the team winless and bottom of the table. Wilder had named Sharp as his captain and now, he beckoned him to the front of the bus as it left the New Den.

“I thought: ‘Here we go, another rollicking,’” Sharp says. “But he said to me: ‘Get your heads up off the tables, and go and get a few drinks from the off-licence.’ I went in wearing full Sheffield United tracksuit, it was two minutes from the Millwall ground, and we basically cleared out the off-licence, so the owner was happy! It went a long way with the lads. The following week we won and we went 15 unbeaten [en route to promotion with 100 points].”

The past three months or so have been strange for Sharp when his character has been tested in different ways. As captain, he has been part of lengthy Zoom meetings “three or four times a week and if it hasn’t been with my teammates, the manager or the chief executive, it’s been with the Premier League or the PFA”.

Now, it is back to what he knows best. Before lockdown, Sharp had moved to four goals for the season with two more in the league and one in the FA Cup. Each came in one-goal victories. Yet he believes that a fairytale campaign on the field can deliver the Cinderella ending.

“There’s no reason why we can’t finish in one of the European places,” Sharp says. “However high we finish now, it’ll be a brilliant season but we want to make it one that we’ll be remembered for as players, to achieve something unbelievable.”