They came in many shapes and colours, from cheery red bandanas to disposable pale blue masks with elasticated string.

But as commuters donned face coverings to comply with rules that made them compulsory on public transport in England from Monday, a sizeable minority were observed to have masks dangling under their chins, perched on their knees or even in their bags, ready to whip out if challenged.

One young man with a pink neon mask under his chin said: “I know it sounds arrogant but I don’t think I’m going to catch the virus.”

While a Guardian survey carried out in the first week of June found that fewer than four in 10 people were wearing masks in some areas (in Manchester the figure was as low as one in 10), that number appeared to have increased on Monday, as stations including Euston in London distributed disposable masks for free.

More than 3,000 extra staff, including police officers, have been deployed to stations to ensure people comply with the new rules. Theoretically those not wearing a face covering will be asked to wear one or will face being refused access to public transport and fined £100. 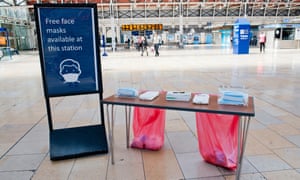 Euston was one of the stations where free disposable face marks were being made available. Photograph: Jill Mead/The Guardian

In practice the Guardian saw none of the minority of commuters, mainly young men, who appeared to be travelling without a face mask, either questioned or fined, despite repeated announcements on many trains and at stations that wearing a mask was now compulsory.

Some of the staff drafted in to enforce the new rule, decked out in pink hi-vis jackets, were themselves in the “mask dangling under the chin” category. 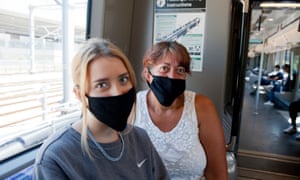 Tanja, right, and Cora Van Wyngaardt were among those to comply with the compulsory wearing of face coverings on public transport. Photograph: The Guardian

Tanja Van Wyngaardt, 51, who was travelling with her daughter Cora, a 19-year-old criminology student, and their bicycles on the Reading train to London, were both wearing black masks.

“They’re actually Halloween masks turned the other way,” said Cora, briefly turning the mask inside out to show a pair of white gnashing teeth imprinted on the material.

Tanja said she and her daughter had seen many passengers on their train not wearing face masks and not being challenged.

“I think a lot of people aren’t convinced they work,” she said. “But they are brilliant at concealing double chins.” 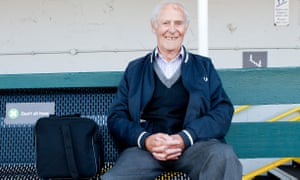 One first-time mask wearer waiting at Kings Langley station said his mask was tucked away in his pocket ready to put on when he boarded the train. Photograph: Jill Mead/The Guardian

One first-time mask wearer was a man who told us he was 96 years old and a former midfielder for Glasgow Rangers. He declined to give his name but told us he owed his good health and sprightliness to a lifetime of exercising.

He was impressed with huge fundraising efforts of Capt Sir Thomas Moore during the pandemic. “But I can walk better than him. I walk four or five miles every day,” he said.

He was sitting on the station platform at Kings Langley station and told us his mask was tucked away in his pocket ready to put on when he boarded the train.

Was he concerned about catching the virus, especially given his age?

“No, I’m not concerned about that at all,” he said. “But I am concerned about Boris Johnson. He’s making a complete mess of handling all this. I believe he will suffer politically when the pandemic is over.”

Coronavirus: What is the true death toll of the pandemic?