It was the first time Macron has spoken on the issues since George Floyd’s death in the United States unleashed protests around the world, including several in France, where demonstrators have expressed anger at racial injustice and police brutality, particularly toward minorities from France’s former colonies in Africa.

Unusually for a French leader, Macron acknowledged that someone’s “address, name, color of skin” can reduce their chances at succeeding in French society, and called for a fight to ensure that everyone can “find their place” regardless of ethnic origin or religion. He promised to be “uncompromising in the face of racism, anti-Semitism and discrimination”.

However, he insisted that France will not take down statues of controversial, colonial-era figures as has happened in some other countries in recent weeks.

Amid calls for taking down statues tied to France’s slave trade or colonial wrongs, Macron said “the republic will not erase any trace, or any name, from its history … it will not take down any statue”.

“We should look at all of our history together” including relations with Africa, with a goal of “truth” instead of “denying who we are”, Macron said.

Macron also said that the fight against racism became distorted when it became exploited by what he described as “separatists”.

“It is necessary to unite around Republican patriotism. We are a nation where everyone—whatever their origin and religion—can find their place,” he said.

>> As George Floyd outrage spreads, France confronts its own demons

Like many governments around the world, Macron’s is facing growing pressure to confront racism and police violence.

At least 15,000 people demonstrated in Paris on Saturday, the latest in a string of French protests galvanized by George Floyd’s death in the United States and the Black Lives Matter movement, but increasingly focused on France’s own tensions between police and minorities.

In response, the government banned police chokeholds and vowed to stamp out racism among police — but that has now angered police unions, who say they’re being unfairly painted as white supremacists and staged protests of their own.

During his address on Sunday night, Macron didn’t address accusations of police violence but he defended France’s under-fire police force, saying they « deserve public support and the recognition of the nation for their work ».

« Without Republican order, there cannot be security or freedom, » he said.

Police have protested against what they perceive as a lack of backing from the government and in particular Interior Minister Christophe Castaner.

Several hundred police staged a second night of demonstrations in Paris after the president’s address.

« We are not at all reassured by the speech tonight, on the contrary, » an officer demonstrating near the Eiffel Tower told . on Sunday.

The previous night, several dozen police officers parked their police cars by the Arc de Triomphe and flashed their lights.

Gone With the Wind

Calls are mounting in France to reassess the country’s colonial legacy, causing division within Macron’s own camp.

Over the past two days, the culture minister denounced the decision to cancel a Paris showing of “Gone With the Wind” — a film long criticized as romanticizing slavery — as contrary to freedom of expression. And he firmly condemned activists who tried to take a piece of African art from a Paris museum dedicated to artwork from former colonies. 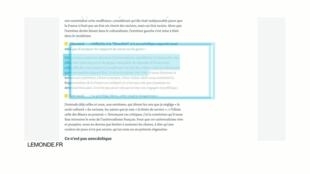 But government minister Sibeth Ndiaye — a close Macron ally and the most prominent black figure in current French politics — wrote an unusually personal essay Saturday in Le Monde calling for France to rethink its colour-blind doctrine, which aims at encouraging equality by ignoring race altogether.

“We must not hesitate to name things, to say that a skin color is not neutral,” she wrote. She called on the French to “confront our memories” about their history and find a “shared narrative” with former colonies.

Under pressure from police, France backs off chokehold ban