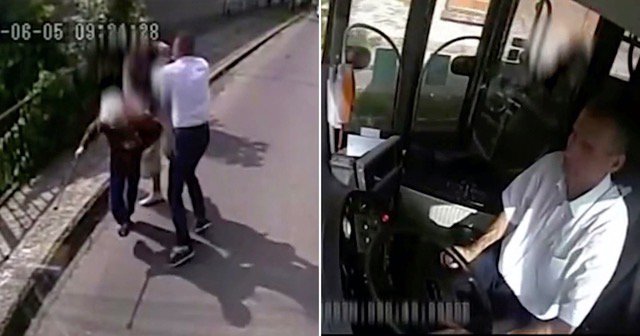 To view this video please enable JavaScript, and consider upgrading to a web
browser that
supports HTML5
video

A hero bus driver pulled over after seeing an elderly woman being mugged and jumped out of his cab to fight off the attacker.

Video recorded on his bus surveillance cameras shows driver Károly Zsolt Kis jumping on the breaks after seeing a man attempting to snatch the woman’s handbag.

The former soldier, who served in Iraq, spotted the woman struggling with a walking stick when the thief targeted her.

Károly pulled over by Újgyőr market in Miskolc, Hungary, ran over to the woman and shoved her attacker away.

He then stood between the attacker and victim until the thief ran away.

The elderly woman then entered his bus before Károly pulled away to continue on his route.

Police have identified and arrested a 27-year-old man after the incident shortly before 9.30am on June 5.

The victim was not injured but was said to be shaken up by the incident, according to local reports.

For more stories like this, check our news page.