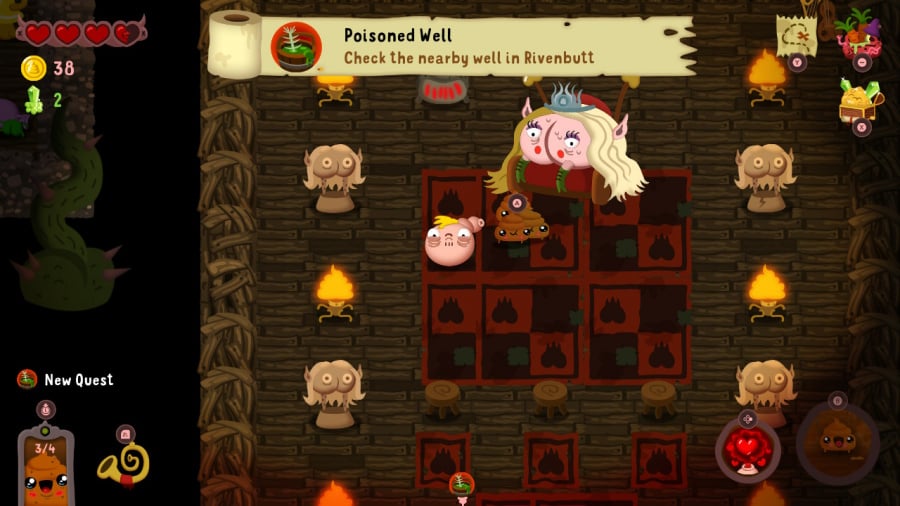 At first glance, Poopdie – Chapter One is an enormous rip-off. Every aspect of its presentation calls to mind Edmund McMillen and Florian Himsl’s seminal roguelike The Binding of Isaac. Taking a step back, we gave it a second glance, and yep – this game wants to bite Isaac’s style so hard it’s on the verge of drawing blood. That’s just in its aesthetic, mind you – the gameplay doesn’t even come close. However, if you laugh out loud every single time you see a butt, or some poop, or some poop coming out of a butt, then either you’re six years old or Poopdie is the game you’ve needed all your life. If you fall under those criteria, please feel free to pretend that the number down at the bottom of this page says ’10’.

There’s a momentary whisper of fun to be had in the first thirty seconds or so of Poopdie. Sliding your little butt-worm-thing around the top-down map (think classic Zelda or Ittle Dew, in the loosest possible way) feels pretty smooth and responsive. On top of this mind-blowing selling point, there are also myriad shades of brown you can enjoy looking at. Okay, we’re done with the positives – let’s get stuck in.

You’ll spend a lot of your time with Poopdie standing around while you hold down the ZR button. See, the lion’s share of the experience is a very, very, very barebones thing wherein you spawn poops out of your butt-worm then use the right analogue stick to point them at whatever you want destroying. Press ZR to sic the little turds on whatever obstacle or enemy is in your way, and wait patiently. Often you’ll find that it’s simply some overgrowth that needs to be destroyed before you can progress past it, which takes a solid 20 seconds or so of ‘poop assault’ before it falls. Frequently, there’ll be another identical obstacle right behind it. At least you’ll have time to catch up on your reading, we guess.

No matter what mission you take on from the scatological cast of unmemorable characters you’ll find dribbling around the map, the gameplay does not deviate from this tedium. Go towards the waypoint. Hold ZR to have your army of faeces attack some kind of purple backside. Poop troops fall in battle? Retreat a little and spawn some more, then repeat ad nauseam.

Sometimes you won’t have enough in the way of resources to spawn any poops at all, requiring backtracking if you can’t spare the coins to simply buy some. Said coins are dropped in aggravatingly small quantities by fallen enemies and obstacles, which you can use to buy upgrades and scrolls which slightly mitigate the powerful apathy generated by the ceaselessly repetitive proceedings, but only briefly. Once the enemies scale up in difficulty, it’s back to holding ZR for protracted periods once again.

And that’s about it, really. It’s an extremely dull game with a borderline-plagiarised aesthetic, no remarkable features or interesting level design, and a pointless association with PewDiePie to make it even less appealing to anyone but his fans, or people with no critical faculties to speak of. It’s a shame, because point-and-click adventure Bulb Boy – another game by the same developer – was actually quite good.

If The Binding of Isaac didn’t assuage your desire for whining, crying, pooping babies, this won’t satisfy your strange craving. If it wasn’t associated with such a high-profile streamer it wouldn’t even have cause to exist. Who knows, though? Maybe Poopdie – Chapter 2 will be amazing. And monkeys might fly out of our butt. If you laughed at the word « butt » just then, definitely buy this game.