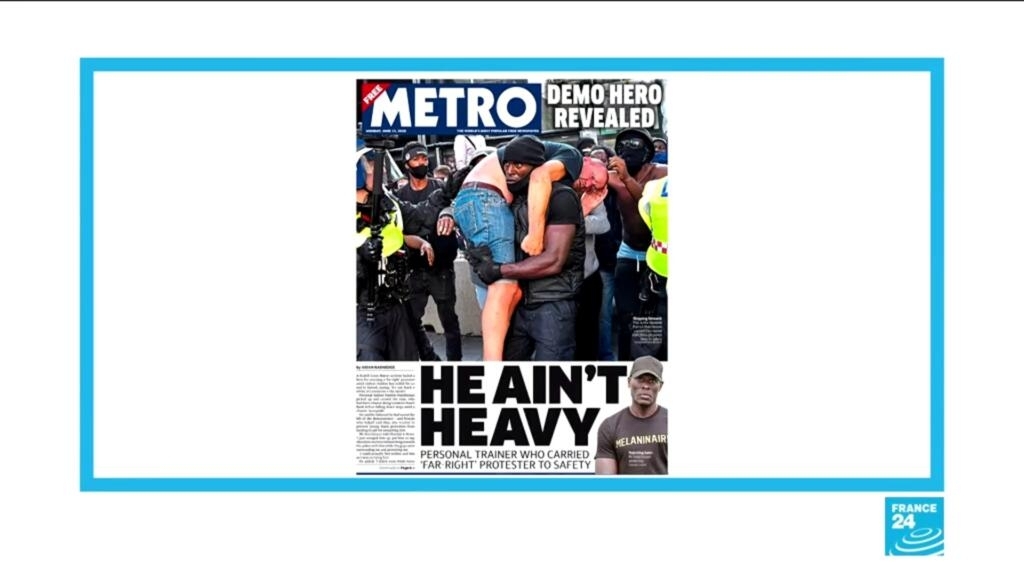 IN THE PAPERS – Monday, June 15: We look at criticism of French President Emmanuel Macron’s latest televised address, an op-ed from British Prime Minister Boris Johnson responding to Black Lives Matter demonstrations, and a cartoon drawing a connection between racial inequality and the Grenfell Tower fire, which marked its three-year anniversary on Sunday. Plus, the viral photo of a black demonstrator saving a white, far-right protester.

France’s left-wing papers are unimpressed by Emmanuel Macron’s latest televised address. As Libération sums it up: « Macron congratulates Macron » – the president was clearly self-satisfied as he hailed France’s containment of the coronavirus outbreak. A patriotic tone that the paper says extended to the topic of racism and police violence, with Macron using his classic phrase « at the same time » to acknowledge racism all while defending the police and rejecting the idea of taking down statues.

France’s communist paper L’Humanité has similar criticisms – they say Macron remains « confined to his convictions ». The paper is disappointed that he failed to show more empathy for France’s youth, especially those who have been out in numbers protesting against racism and police violence. For L’Humanité, Macron’s attitude shows that he’s given up on winning them over, accepting that « the divorce has already been finalised ».

Over in the UK, PM Boris Johnson has also been pushed to respond to the Black Lives Matter protests. He’s published an opinion piece in his old paper the Daily Telegraph, announcing the creation of a commission to examine inequality. Still, like the French president, he remains firmly against the removal of historic statues and monuments.

Meanwhile, the Guardian’s cartoonist Ben Jennings points to a more recent monument rooted in racism and inequality: Grenfell Tower. Sunday marked the three-year anniversary since the fire in the apartment block that killed 72 people. Residents who called emergency services told them « I can’t breathe » – a phrase that has emerged from so many different contexts and has become a rallying cry against racism around the world.

Finally, this weekend’s protests in the UK did lead to one positive image that’s getting a lot of attention: a photo of a Black Lives Matter protester rescuing a white man believed to be a far-right demonstrator. The BLM protester is being hailed as a hero – his name is Patrick Hutchinson; he’s a personal trainer and grandfather. He directly compared his action to the lack of action from police officers who watched George Floyd being killed by one of their colleagues in the US. If they had intervened, he says, then Floyd would still be alive today.

China, India blame each other for border clash as death toll remains unknown