Squadrons takes place after Return of the Jedi, and there’ll be both a single-player campaign and multiplayer. The trailer is more about setting the tone and giving you an idea of what’s in store, rather than delving too heavily into the features, but it sure does look pretty.

What we do know so far is that the online modes include five vs. five dogfights and Fleet Battles, in which you’ll work with your teammates to take down the enemy flagship. You’ll prepare for missions with the rest of your squadron in a briefing room before hopping into your starfighter and going into battle. Squadrons will feature familiar locations and brand new ones, including Yavin Prime and the moon of Galitan. EA suggests that team composition will be important too.

The single-player campaign takes place after the Battle of Endor and the destruction of the Death Star II. You’ll swap between the perspectives of two pilots: one from the New Republic’s heroic Vanguard Squadron and the other representing the Empire’s Titan Squadron. Both pilots are customizable and the campaign will feature an array of original characters. You might also spot cameos from some familiar faces. 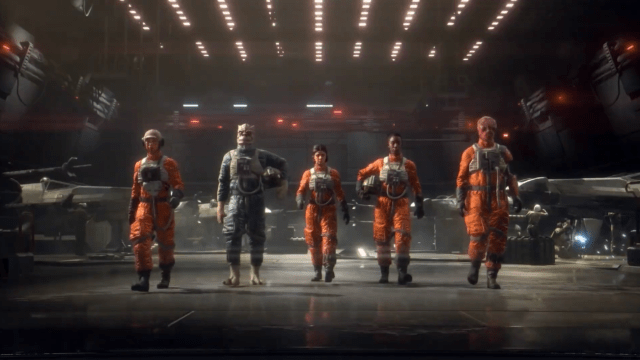 One option you’ll have at your disposal in battle is to divert power between your ship’s different systems. You’ll be able to pilot a bunch of different Imperial and Rebel starfighters (including X-wings and TIE fighters), which you’ll be able to modify.

Although there are cosmetics and gameplay modifiers — such as weapons, hulls, engines and shields — EA said you’ll be able to earn all of these through gameplay alone. The publisher faced a firestorm over how it initially handled loot boxes in Battlefront II, with many criticizing it for a system that would have essentially paywalled certain upgrades.

Squadrons will be released on October 2nd and it’ll cost $39.99. If you’re an EA Access or Origin Access Basic member, you’ll be able to play 10 hours of Squadrons at launch, and you’ll save 10 percent off the retail price if you buy it. Origin Access Premier subscribers will get full access to the game on PC. Meanwhile, PS4 players can claim some bonus cosmetics if they pre-order.

You can expect to learn plenty more about Star Wars: Squadrons ahead of the release date. EA will keep the ball rolling with a gameplay preview at EA Play this Thursday.