Pokémon Go Fest 2020 is a two-day event held on July 25 and 26 from 10 a.m. to 8 p.m. in your timezone. In year’s past, Pokémon Go Fest took place in Chicago, but due to the COVID-19 pandemic, developer Niantic is making this year’s festival a worldwide event, meaning you can be a part of it from anywhere, even in your house. For the first time, players attending the fest can play on both days. Tickets are available to everyone, and can be purchased within the game for $14.99.

If you attended one of these fun gatherings in previous years, Niantic set up walking trails through parks that took you to different habitats to catch specific Pokémon, like ice-types in the tundra. Special Research missions were tied to these locations, which pushed you to walk all over the park as you moved from habitat to habitat. This year’s fest still includes habitats, but you don’t need to travel to them – they are going to come to you and will rotate every hour. Niantic says the Special Research for this year’s Fest will be a mix of habitat-based and general.

As new habitats appear, you can catch 75 different Pokémon. Niantic hinted to me that one of them will be a new Mythical, likely appearing at the end of the Research quest. If this year’s selection of Pokémon plays out like in years past, expect to run into plenty of new Shiny variations as well.

If you and your friends don’t live in the same city, state, or country, you have a new way of telling if they are playing the game. A new feature called Niantic Social will launch later this month in Pokémon Go, and will be added to Niantic’s other titles at a later date.  The beta of Niantic Social won’t offer much in terms of interaction, but allows you to see when other players are online. Niantic says more features will be added over time.

Players will also be able to communicate with other players through Virtual Team Lounges. You’ll need to travel to a website for the Lounges, which hold giveaways, developer interaction, and updates on the festival. Through the game, you can also see how the entire Pokémon Go player base is progressing in the Fest’s Global Challenges. You can see the Global Challenge screen below: 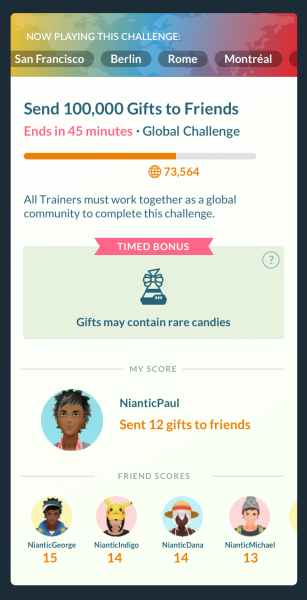