Edmund races to 40-love on his serve before making his sixth double fault of the day. But he steadies himself and cracks a 116mph ace to Djokovic’s body for the hold. Djokovic will again serve for the third set after the changeover.

Edmund showing good fighting spirit, getting his teeth into Djokovic’s serve at love-15 and 15-30. Djokovic gets it to 30-all but mixes in a double fault to gift Edmund a break-point chance. And Edmund is able to nab the break as Djokovic sends a backhand into the net early in the point.

Well, that was quick. Edmund falls behind 15-30, then 30-40, then watches helplessly as Djokovic passes him with a clinical backhand winner as both players come to net. Djokovic to serve for the set after the break.

Just when it seemed Djokovic with set to run away with the proceedings, Edmund hunkers down and wins three quick points on his opponent’s serve to give himself three cracks at a break point. Djokovic saves the first with an unreturnable serve, then the second with a 123mph ace down the middle. But he makes an unforced error of a forehand early in the third and Edmund has a quite unexpected break.

Oh boy. Edmund is broken at love, a disastrous service game strewn with unforced errors off the ground and a double fault. He’s down a double break and the ship is taking on water with Djokovic having won the last 11 points on the trot.

Djokovic always seems to be at his laser-focused best in his service games following a break – and this one is no different. He consolidates with a straightforward love hold, just as he did in the second set.

Edmund appeared on the brink of an easy hold but Djokovic is giving him no quarter. The world No 1 wins two hard points from 40-15 down to force deuce, then Edmund mixes in a double fault to gift his tormentor a break-point chance. Edmund saves it but finds himself facing another moments later. This time Edmund sends a backhand flying over the baseline and Djokovic has the break.

Another business-like hold for Djokovic, who’s won 24 of the last 31 points on his serve.

A patchy start for Edmund, who quickly goes down love-30 on his serve. But he responds with an unreturnable serve, overhead winner, 112mph ace out wide and 111mph service winner down the middle. Danger averted.

As an aside: Thursday’s order of play is hot off the presses. Australian Open winner Sofia Kenin and world No 3 Dominic Thiem headline the day session on Ashe with 23-time major champion Serena Williams and Canadian comer Félix Auger-Aliassime playing under the lights.

Edmund inches closer toward his first break of the match after Djokovic sprays an inside-out forehand wide, then nets a backhand for love-30. But Djokovic digs in to win the next three points before painting the service line with a 123mph ace to nail down the set. Edmund only had five unforced errors in the set, but three of them came in the fatal fourth game (including two double faults). 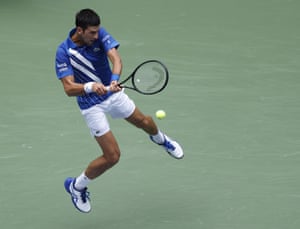 Edmund holds from love-15 and 15-30 down. Djokovic to serve for the second set.

A glimmer of hope for Edmund as Djokovic misfires off the forehand side to go down love-15 on his serve, but the Serb rattles off four quick points from there to hold easily. Edmund will serve to stay in the second set after the changeover.

Edmund needed a drama-free hold to stem the tide and that’s what he’s produced, crunching a 110mph ace out wide for 40-love followed by another quick point to close it out. But he will need to make some headway on Djokovic’s serve if he hopes to keep the pressure on the world No 1.

Djokovic consolidates the break in expeditious fashion, pounding a pair of aces down the middle en route to a quick love hold. Edmund is changing his socks during the changeover for the second time today.

A chance for Djokovic here after Edmund follows an unforced error off his backhand with his third double fault of the day. Djokovic pushes it to 15-40 and double break point. And Edmund double-faults again! Oh dear. His first sloppy service game of the afternoon is a costly one as Djokovic gets the break.

Djokovic races to an easy hold, bookended by his fifth and sixth aces of the afternoon. He’s won 29 of 35 first-serve points so far, a tidy 83% clip.

Edmund wins the first point on Djokovic’s serve with a crisp backhand winner, but Djokovic cruises to the hold from there, closing out the game with a 119mph ace down the middle.

Well, well, well. Serving at 5-all, Djokovic gives Edmund a sliver of daylight with a misfire off the forehand side … and Edmund smashes right through with a 123mph ace down Broadway to close out the set in style after 68 minutes. Djokovic had been a perfect 10-for-10 in tiebreakers this season. No longer. 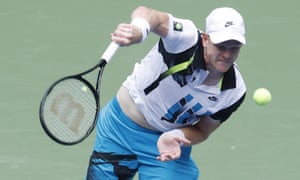 Edmund holds his serve to start, then goes up a minibreak with forehand winner early in the rally. It’s the first point he’s won on Djokovic’s serve in nearly a half hour, but moments later Djokovic gets the minibreak back with a forehand winner at the net and they’re back on level terms with Djokovic to serve at 2-3. A 17-stroke rally follows and it’s Edmund who blinks first, making an unforced error off the backhand side, and they’re even at the change of ends.

Djokovic cruises to another love hold. That’s 15 straight points on his serve and 23 of the last 26. Heading to first-set tiebreaker.

A dangerous moment for Edmund, who goes down love-30 after Djokovic gets the better of him over a grueling 24-stroke exchange where he’s at his backboard-like finest. But the 25-year-old digs in and rattles off four quick points to hold from there. An impressive escape for Edmund, who quickly darts into the tunnel as the changeover starts for, presumably, a quick bathroom break.

Djokovic is dialed in on his serve, holding at love for a second straight game. He’s gotten 68% of his first serves in and won 84% of his first-serve points, both a few clicks above his season averages. 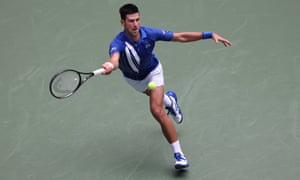 Edmund cracks his first ace of the day, a 116mph missile down the pipe for 30-love, then holds comfortably from there. Another confidence-building service game for the Yorkshireman, who’s 10 of the last 12 points on his racket. Djokovic will serve to stay in the first set after the change of ends.

Djokovic breezes through a business-like hold at love. He’s won 12 of the last 15 points on his serve.

Edmund races out to 40-love before making his first double fault of the day, but wins the next point to hold. Cleanest service game for the 25-year-old so far.

Another stress-free service game for Djokovic, who holds with a backhand winner following a short rally which saw Edmund hit at least three brilliant shots. I’d imagine that’s quite frustrating. High-quality shotmaking on both ends so far.

Serving at 15-all, Edmund mixes in his sixth unforced error of the day and he’s behind for the third time in as many service games. He wins the next point with a overhand smash following a 25-stroke rally, the longest of the day so far, before holding from there. 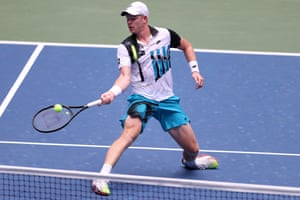 An early chance for Edmund as Djokovic mishits a volley then double-faults to fall behind love-30. Djokovic gets it back to 30-all with his second ace of the day, but Edmund responds with a backhand passing winner at the net off a feeble drop-shot attempt by the Serb. It’s a first break-point opportunity chance of the day for Edmund, but Djokovic quickly erases it with a 118mph service winner down the middle then holds from there.

Serving at 30-all, Edmund misfires on a forehand from the baseline and will face his first break point of the day. He saves it with a 112mph serve that Djokovic can’t return into the court, then saves a second moments later with a gorgeous cross-court backhand winner set up by a kicking second serve. The dogged world No 1 scratches back to force a third break chance and Edmund erases that one, too. Finally – after 11 minutes, 16 points and three break points saved – Edmund holds with an overhand winner. 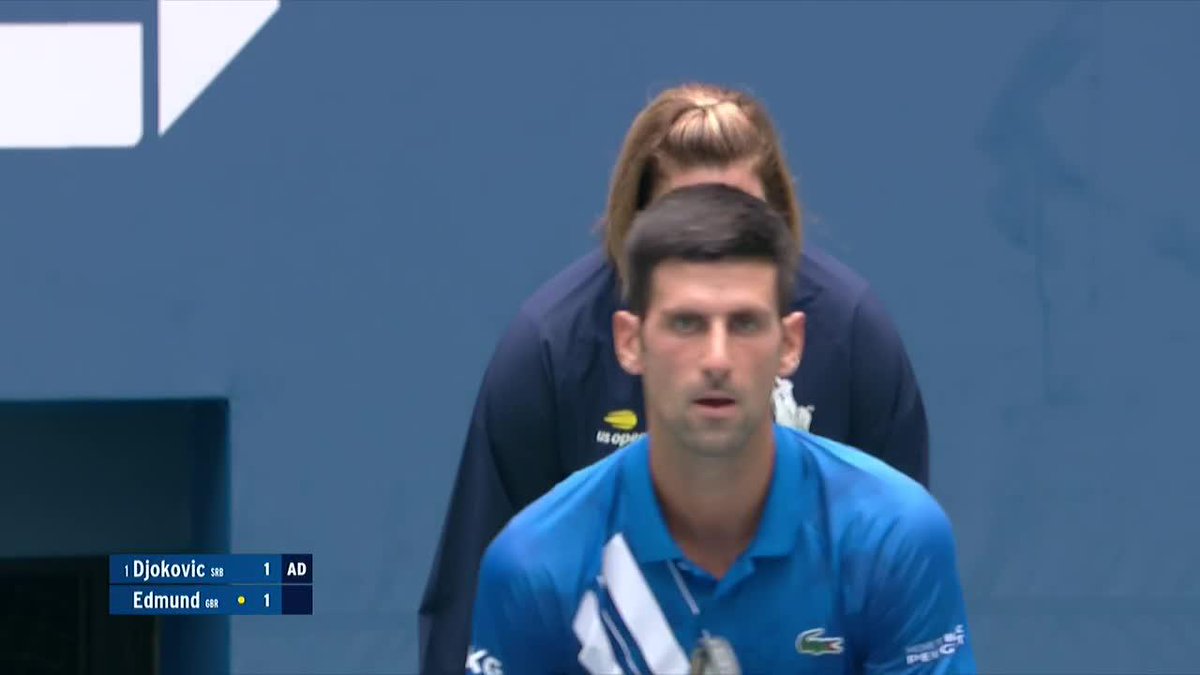 Djokovic holds comfortably in his opening service game, crunching an 118mph ace down the middle along the way.

Edmund won the toss and has elected to serve. Djokovic wins the opening point, getting his teeth into a lengthy baseline rally and forcing Edmund to falter off the forehand side. But Edmund rights the ship from there, winning four quick points to hold serve and get on the board against the world No 1.

Happy Tuesday and welcome to day three at Flushing Meadows. We’re moments away from one of the showcase matches of the day session as Britain’s Kyle Edmund takes on world No 1 and three-time US Open champion Novak Djokovic in Arthur Ashe Stadium.

The players have taken the court and are going through their warm-ups. While we wait, here’s Kevin Mitchell’s lookahead to today’s second-rounder.

Bryan will be here shortly. In the meantime, here’s how Andy Murray is getting ready for his next match:

Félix Auger-Aliassime was a skinny kid in New York down from Canada nine years ago when he scored some tickets for a night match on Arthur Ashe at Flushing Meadows and saw Andy Murray thrash Feliciano López in the third round on his way to the semi-finals of the US Open.

Now a fully-grown and exciting professional, Auger-Aliassime will have to narrow his wide-eyed wonder a little when he looks across the net at Murray on Thursday in the second round of the 2020 edition of the championships. And, for all his cool, he will hope he has the game to handle the sort of relentless pressure the Scot brought to bear on the bewildered Yoshihito Nishiokaover five sets on Tuesday evening.

Auger-Aliassime, 13 years younger than Murray and 94 places ahead of him in the rankings at 21, had his own fight in the first round, coming through three tie-breaks in four sets in just under four hours against the stubborn Thiago Monteiro. He is prepared for more of the same.

Afterwards, he recalled the first time he saw Murray. “I came once as a spectator to the US Open in 2011,” he said. “I was just a kid. We got tickets for Arthur Ashe Stadium. Andy was playing López in a night match in the third round. That was a big memory of mine. I was live, here. It’s crazy to feel today there’s not going to be a kid in the stadium watching, it’s going to be me playing.”

You can read the full report below: