32nd over: Australia 145-4 ( Carey 0, Finch 73) Morgan continues with Archer, as he must, and he does exactly what his captain hopes. Back of the length, slower ball, and then one that flies low and hard for Marsh, who’s had no time to acclimatise, to chop on.

Woo-hooo! It keeps low and Marsh is squared up and edges onto his own stumps! It’s like that moment in the Magic Finger when the little girl’s finger starts to tingle.

31st over: Australia 145-3 (Mitch Marsh 1, Finch 73) And of all things, a wicket, when it looked as if no more were available for England this evening. England have a glimmer of a chance now, with a new batsman in at the tricky twilight stage.

Labuschagne spits out his bubble-gum in disgust – he’s missed a straight one. England have to review as Michael Gough initially gave it not out; but Woakes was confident. 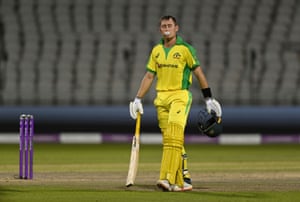 30th over: Australia 137-2 (Labuschagne 47, Finch 71) Clever play from Labuschagne, who ramps Archer – but not too hard- and directs him nicely, imagine a small child setting up animals on a toy farm with great precision. Australia need 89 from 120 balls as the sun sets, brilliantly, over the Manchester skyscratchers.

29th over: Australia 137-2 (Labuschagne 44, Finch 70) Finch and Labuschagne don’t fancy Woakes much either, but they’re so well set they can happily just run quick singles. I take that back – Labuschagne’s eyes light up at and he swivels and pulls Woakes – what style! – for four. That’s the hundred partnership and England need something spicy here to stop this turning into a procession.

Robert Stanier is thinking ahead to the Ashes. “Pretty good case for an Archer-Broad opening bowling combination against David Warner in two years’ time.And while we’re at it, Rashid’s record against Smith means he has to be cajoled into playing somehow.” It’s a tasty prospect. Rashid was making the right noises last time I heard.

28th over: Australia 131-2 (Labuschagne 39, Finch 69) It’s twilight and Archer is fierce. Finch shapes to pull him but the ball comes on more quickly than he was expecting and cracks him near the breastbone. That hurts. 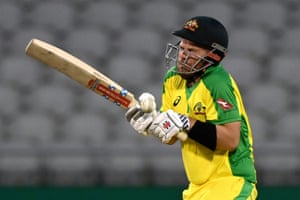 27th over: Australia 127-2 (Labuschagne 38, Finch 64) The third run-out chance England have missed today as Roy takes a one legged turn and throw and the ball billows wide – would have been out by an elephant’s yawn.

Ed Smith is on the balcony. It’s ok, he’s in his dream-boy blue shirt and blazer. Imagine Ed in red or orange – something would be terribly wrong.

26th over: Australia 124-2 (Labuschagne 37, Finch 64) Archer has to be the answer to Morgan’s question. And he’s on the money right away, quick and smart. He cracks Labuschagne on the back leg first ball, then scrapes the bottom of Finch’s bat with a blow so hard that Finch shakes his hand in discomfort.

I often think about this question –are batsmen discouraged from chewing gum when batting – the danger of choking if they are hit etc. Does anyone know is their a medical recommendation on this subject?

25th over: Australia 121-2 (Labuschagne 37, Finch 62) Could that be the moment gone? Finch has a huge swing at Rashid and smacks him, with the strength of a dragon, through Rashid’s hands and down to the boundary. A chance on paper, but a tough one. 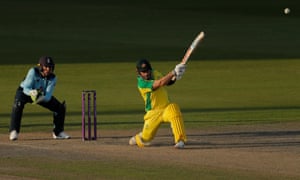 Niall Morrisey on cricketing odours: “One smell I will always remember is the white gunk with which we covered up the mud stains on our canvas pads. The stuff was also used on boots. There is a story of a test batsman deliberately whitening his pads before going out to bat. The opposition had a mystery spinner. As soon as he could, he got pad on ball. Now he had a white spot to help him see which was the ball was spinning.” Is that a real story? It’s very clever if it is.

22nd over: Australia 109-2 (Labuschagne 32, Finch 56) Rashid spins his way through another six balls – five runs off the over as Australia are content to quietly accumulate rather than bish-bash.

22nd over: Australia 104-2 (Labuschagne 29, Finch 54) Australia breeze through another Sam Curran over, with just a couple of yes-no start-stop runs to worry them. Perhaps time for the heavy artillery to return? With the sun starting to set and the shadows at their most confusing.

21st over: Australia 101-2 (Labuschagne 28, Finch 52) Morgan tries Rashid from the other end after 3 for 27 in his initial spell. Finch tucks into a dolly wide of the stumps which flies past Buttler and down to the boundary, bringing up his fifty from 66 balls. Australia need a steady 131 runs in 29 overs. 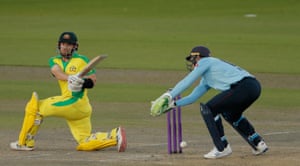 20th over: Australia 95-2 (Labuschagne 27, Finch 47) This is the difficult middle period. The time when you’d jump up to get a beer or go and meet that friend who is sitting in a stand the other end of the ground. Finch and Labuschagne milk Sam Curran and England need a breakthrough.

19th over: Australia 87-2 (Labuschagne 25, Finch 46) Sky have Australia with a 75 per cent chance of winning, but they still can’t get a handle on Tom Curran, who continues to send in his little magical slingshots. 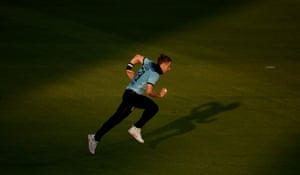 18th over: Australia 87-2 (Labuschagne 23, Finch 43) After nine off Rashid’s last over, Morgan looks at his options and beckons to the other Curran brother. It is Sam’s first game since his first Test of the summer – now that is a lot of bubble time. Perhaps it shows, as he drops shorts and Finch makes brutal contact, square, and past the pale wrists of Joe Root at short midwicket to the boundary.

17th over: Australia 82-2 (Labuschagne 22, Finch 39) Marnus Labuschagne is having a sweet shop moments. He drives, beautifully, and then blows a huge bubble with his bubble-gum before the bubble bursts and gets stuck in the grill of his helmet. I hope it is Hubba-bubba, apple flavour. Never to be beaten. 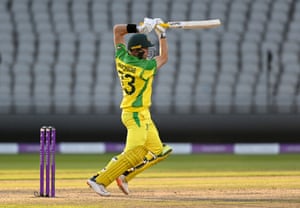 16th over: Australia 75-2 (Labuschagne 16, Finch 38) Rashid proving the more expensive of the change bowlers. Finch and Labuschagne play tip and run, then Finch on-drives him, uppishly, powerfully, for four. They pause for drinks under perfect blue Manchester skies. Yes, you read that right.

An email that I was about to publish before everything started going haywire, from Julie Wilson.

Please tell Daniel that MO-mentum isn’t only the Australian way to pronounce the word; it’s also the northern way.

15th over: Australia 66-2 (Labuschagne 13, Finch 32) Tommy Curran has sewn up the big-hitting Finch, six more dots as he drives and cuts but the ball stubbornly refuses to go outside the circle. There’s something quite David and Goliath about this battle, with Goliath as leaden footed as always.

@tjaldred Thanks for the great commentary, Tanya. Have you now set the family up relaying observations from the living room to you in the kitchen? This is getting like the break-out moment in ‘The Great Escape’.

You’re too kind William. There is something of a Heath-Robinson experiment underway.

14th over: Australia 66-2 (Labuschagne 13, Finch 32) England haven’t lost three ODIs in a row since 2016. Something to mull over, just under a third of the way through the innings. No flies on Finch: he smashes Rashid for a perfunctory boundary then tells Michael Gough the umpire that England have not got four fielders inside the circle. A free hit only brings the single.

13th over: Australia 57-2 (Labuschagne 11, Finch 26) Curran is beautifully tidy. No drop falls from the teacup or saucer. Who are Australia going to go big against. Brother Sam?

12th over: Australia 54-2 (Labuschagne 9, Finch 25) Rashid replaces Archer and is promptly golfed for six by Finch who descends to his knees to plonk the ball into the stands. It isn’t great news for Australia that Archer will still have five overs left for the death. 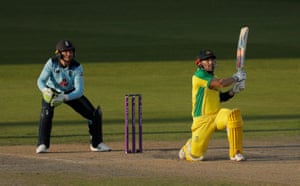 11th over: Australia 45-2 (Labuschage 7, Finch 18) Tom Curran, great saviour of the batting earlier this afternoon, pulls out four dots in a row, as he is plonked in as replacement for Woakes. See here all those chatting to Daniel earlier about the Liam Plunket debate.

10th over: Australia 44-2 (Labuschage 6, Finch 18) Huge apologies, my laptop has decided to update unexpectedly and very slowly. Now on the family pc in the kitchen in the other room from the telly. Oh and I can’t access my gmails but I can access Twitter @tjaldred. Let’s give this a go… both wickets to Archer who also knocked Finch CRACK on the helmet. Two sets of five overs each to Archer and Woakes, Archer marginally more expensive but a lot more incisive. 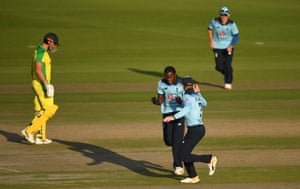 5th over: Australia 16-1 (Stoinis 7, Finch 3) Stoinis bides his time, four balls, before flexing the biceps and having a lollop at Woakes and sending the ball in a perpendicular line straight over the boundary Crash, bang, cymbals and trombone.

4th over: Australia 10-1 (Stoinis 0, Finch 3) Justin Langer is biting his nails in the dressing room as Archer delivers an absolute beauty of an over. He worries Finch with a near 90mph bouncer before slipping Warner in his pocket again, for the fourth time this summer.

He gets his man! A 91mph beauty, zip-bounces and Warner can’t resist having a pop. Buttler takes it neatly behind the stumps and Bob’s your uncle! 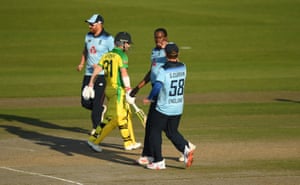 3rd over: Australia 8-0 (Warner 6, Finch 2) An lbw appeal against Finch strangles in Woakes’s throat but hearty not enough to review. Finch punches the next ball firmly down the ground but a nifty bit of fielding by Archer at mid-on restricts him to one.

2nd over: Australia 6-0 (Warner 5, Finch 1) Archer grabs the cherry to have a pop at his favourite walking wicket. Warner has a poke at his first ball outside off stump, then cuts a short n wide one for three. Finch blocks the next four deliveries.

“It’d be the smell of the glue on the patch which brings back the childhood memories. Why did glues (of all kinds) have to be so pungent?”

I still remember my mum terrifying me before I started secondary school about shadowy glue sniffers lurking around every corner.

1st over: Australia 3-0 (Warner 2, Finch 1) An inauspicious start as Tom Curran fumbles from a standing start at short square leg and Australia steal a single. Then Eoin Morgan misses a run-out chance from mid-off with Finch, who misjudged how close Morgan was, way out of his crease. A tidy over from Woakes, and let’s see if England’s fielding can improve from here. Australia’s ground-work wasn’t the tightest either, during England’s innings. 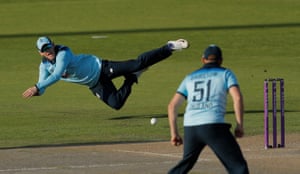 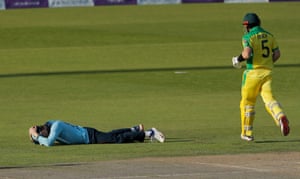 The teams are out. England, in baby blue, pause for a chat. David Warner and Aaron Finch await them in the middle. …

Ha! A bike puncture. Trying to patch it as instructed on Youtube and prove to teenage son how easy it was, but it was just as dispiriting an experience as I remember from my own childhood.

Sensational little segment on Sky on Surrey’s ACE (African-Caribbean Engagement) programme. Ebony Rainford-Brent is the driving force behind trying to engage with the African-Caribbean community outside The Oval gates that has been neglected for so long. Fantastic to hear that they’re not just there to find the next England or Surrey player, but to help young people play 1st XI club cricket, learn how to score, be a physio, become a development officer etc. ERB is something else – just the breath of fresh air/unstoppable hurricane English cricket needs.