Thiem holds from love-15 down, closing it out witth a 104mph ace to keep the scoreboard pressure on Zverev. The first serve has regressed a bit in the fourth: he’s getting only 44% of them in after improving to 74% in the third.

Zverev opens with a forehand winner, but Thiem rattles off three points (including a forehand passing winner at the end of a highlight-reel 18-shot rally) to earn a pair of break-point chances. A big chance for Thiem. But Zverev saves them both, then holds easily from there.

Another economical love hold for Thiem, who’s won 12 of 13 points on his serve in this set.

Thiem rolls to an uneventful hold from love-15 down. 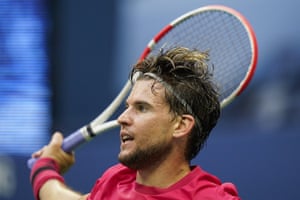 A stress-free hold for Zverev, who cracks a pair of 130mph aces down the middle along the way.

Thiem holds at love to open the fourth. He improved his first-serve rate to 74% in the third set from 68% in the second and 37% in the first.

Zverev opens with a 132mph unreturnable serve, but double-faults for 15-all. Two more scratchy points by Zverev and suddenly he’s down 15-40. Two set points for Thiem and he only needs the first, with Zverev chipping in his 32nd unforced error from the baseline. Third set to Thiem and the comeback is on!

Into. The. [email protected] | #USOpen pic.twitter.com/gkMxspLhZl

Thiem is pushed to deuce but holds from there. Zverev, who chipped in his eighth and ninth unforced errors along the way, will serve to stay in the set after the changeover.

Zverev opens with two aces and a forehand winner and races out to 40-15. Thiem pushes it to deuce thanks to a Zverev double fault and a swinging volley winner, but Zverev holds from there. 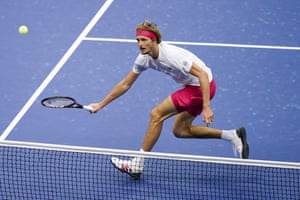 An urgent moment for Thiem as the unforced errors continue to creep back into the Austrian’s game. He quickly goes down love-30 on his serve. Thiem rattles off three quick points but sprays another forehand for deuce. He’s able to hold from there, however, putting the scoreboard pressure back on Zverev. Thiem has now hit 19 winners against 32 unforced errors, compared to 31 winners and 25 miscues for Zverev.

Zverev opens with a 133mph ace down the middle followed by a forehand winner that paints the line for 30-love. Thiem wins the next point when Zverev makes an unforced error but he holds comfortably from there.

Thiem, so shaky on serve all day, needed a straightforward hold to consolidate the break and that’s just what he conjures, holding at love.

Thiem pushes it to 30-all on Zverev’s serve, then Zverev makes a seventh double fault ot give Thiem an immediate chance to break back. Zverev saves it, but makes an unforced backhand error on the next point to give Thiem a second look at a break. Zverev saves that one, then a third before finally breaking through on the fourth. We’re back on serve in the third.

A dangerous moment for Thiem, who goes down love-15 then 15-40 on his serve. Two more break points for Zverev. Thiem saves them with a pair of big serves that Zverev can’t get back into play, but earns a third break chance a moment later … and this time converts it when Thiem overcooks a forehand from the baseline. Zverev has taken this match by the scruff early in the third.

Zverev blitzes to yet another economical love hold, closing it out with a 114mph ace down the pipe.

Thiem is pushed to 30-all on his serve but holds comfortably from there. 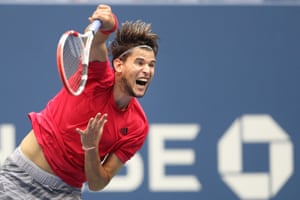 Zverev opens with his sixth double fault of the afternoon. Could the nerves be creeping in? He rattles off two quick points before spraying a backhand wide for 30-all. A big chance for Thiem here. But Zverev slams the door shut, pounding a forehand winner for set point then following with a forehand early in the rally that Thiem can’t get back over the net. The German has staked a commanding two-sets-to-none lead and is one set from becoming the youngest men’s grand slam champion since Juan Martin del Porto won the 2009 US Open title aged 20. 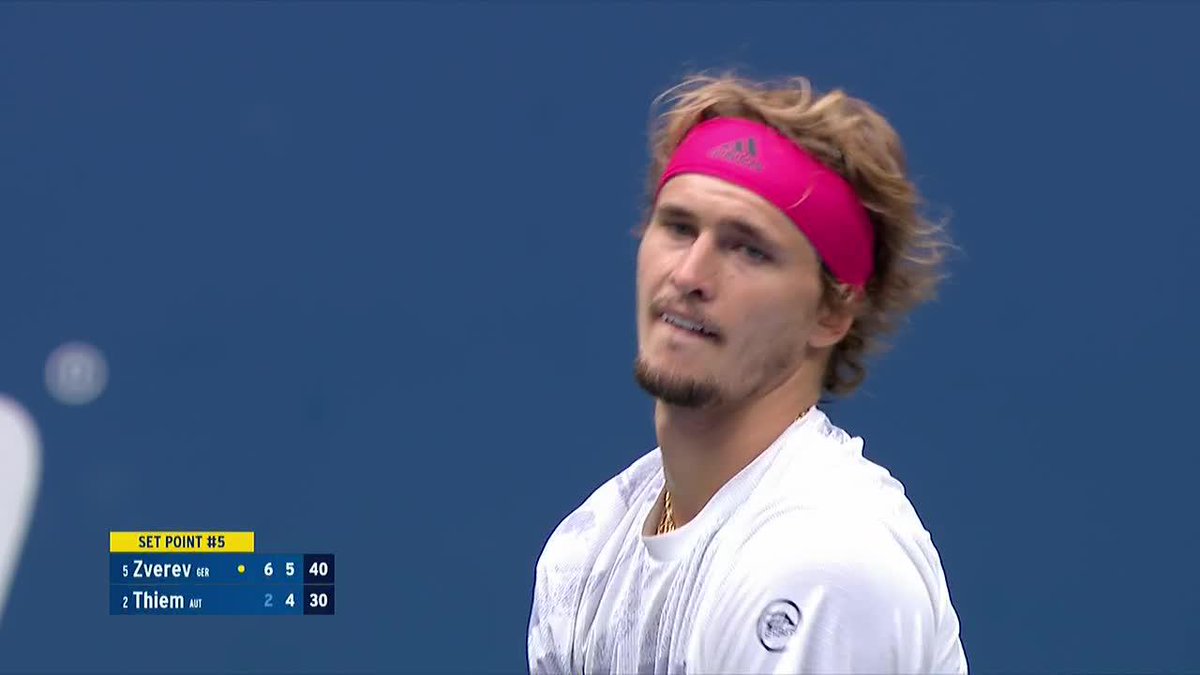 BIG hold for Sascha Zverev, who is one set [email protected] | #USOpen pic.twitter.com/3TChKtkLys

Thiem breezes through his first straightforward service game since the very start of the match, going 110mph unreturnable, backhand winner at the net, 132mph ace down the middle, forehand passing winner to hold at love. Zverev will have a second chance to serve out the set after the change of ends.

Thiem makes a bit of headway on Zverev’s serve winning the opening point then going ahead 15-30 on a Zverev double fault. Zverev answers with a 128mph ace and a 131mph unreturnable serve, but follows with an unforced error and another double fault to go break point down. And Thiem settles a 10-ball rally with a forehand volley winner to get one of the breaks back.

Thiem falls behind love-30 and Zverev is two points from a commanding two-sets-to-none lead. Thiem serves his way of immediate danger with a 121mph ace followed by a 93mph second serve that Zverev dumps into the net for 30-all. Yet another netted forehand by Thiem gives Zverev a set point. The Austrain saves it when Zverev misfires with a forehand, then saves a second and third with a couple of big serves. Finally, Thiem escapes with the hold and Zverev will look to serve out the set.

Another business-like hold for Zverev, who closes it out with a forehand winner, his 19th overall against 11 unforced errors.

Big trouble for Thiem, who goes down love-15 on his serve then 15-40 after another double fault. Two break points for Zverev. Thiem saves them both, but follows with his 16th and 17th unforced errors to go down a double break in the second. 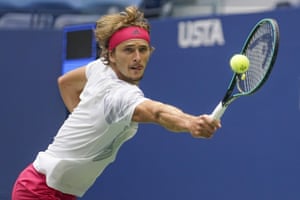 A window of opportunity for Thiem after he pounds a pair of forehand passing winners on Zverev’s serve for love-30. Zverev rattles off three quick points but then double faults for deuce. He fights off another deuce point from there en route to another hold to stay out in front.

Thiem continues to struggle badly on his serve. After going down love-30, he wins the next point from the baseline and follows with a 112mph ace for 30-all. But Zverev then hits a forehand winner for break point and converts it with an assist from Thiem’s 13th unforced error.

Another brisk hold at love for Zverev, this one spanning all of 45 seconds. He caps it with a 125mph ace down the middle and has now won 19 of the last 21 points on his serve – and 20 of 23 overall.

Thiem is pushed again on his serve to open the second. Serving at 30-all, he makes another double fault to give Zverev a break-point chance. But he saves it after getting the best of Zverev in an 11-shot baseline rally, then holds from there.

Zverev races out to 30-love. He’s won 13 straight points on his serve and is two points from the set. He then mixes in a double fault before Thiem wins the next point for 30-all, opening the door. But Zverev holds from there, thumping a 122mph ace to the body on set point to close it out. He hit 16 winners against six unforced errors, winning 92% first-serve points and seven of eight points at the net. 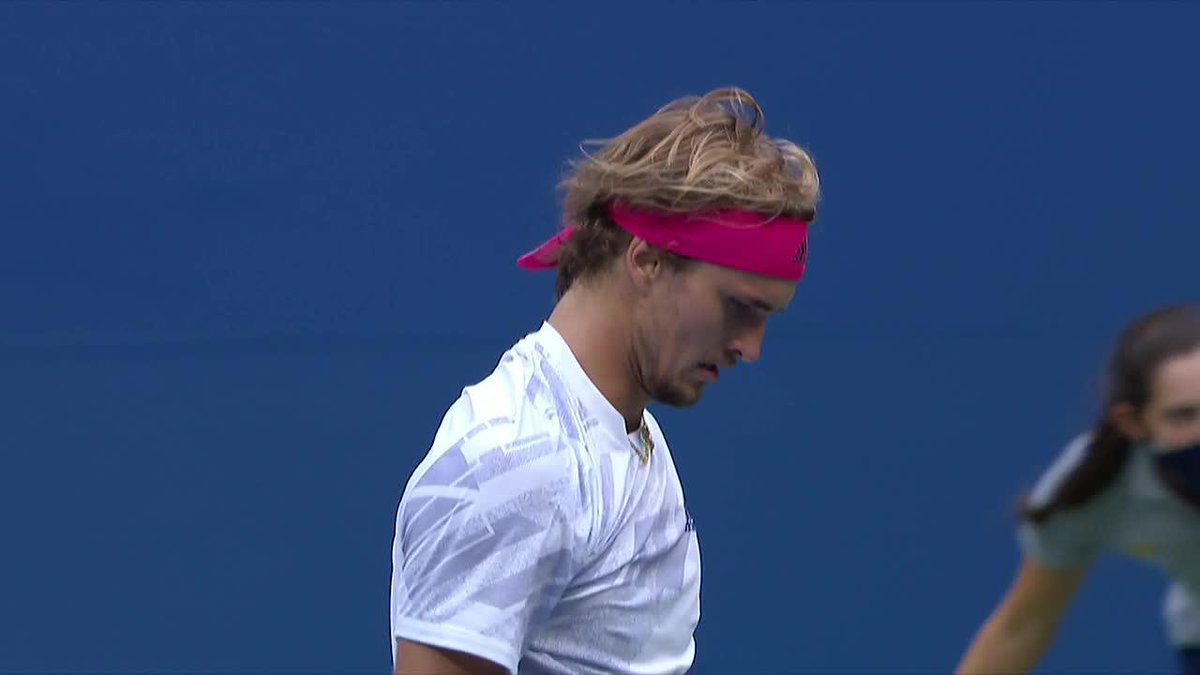 After getting pushed to 30-all on his serve, Thiem responds with his fastest serve of the day: a 109mph ace out wide for 40-30. But Zverev pounds a backhand winner from the baseline on the next point for deuce and then Thiem makes his third double fault for another break-point chance. And he converts it, hitting a backhand up the line that Thiem can’t return into the court for a double-break lead! The Austrian is serving at only 37% and winning 29% of the second-serve points. Zverev will serve for the set after the change of ends.

Another love hold for the dialed-in Zverev, including a 124mph ace down the pipe. A brisk 49-second service game and he’s won the last 11 points on his serve.

More trouble for Thiem as he quickly goes down love-30 on his serve with his third and fourth unforced errors. He answers with a few winners for 40-30, but Zverev pushes it to deuce. Thiem escapes with the hold from there, winning a couple of commanding points from the baseline.

Zverev backs up the break emphatically, going 138mph unreturnable serve, backhand volley winner followed by backhand and forehand winners from the baseline to hold at love. The 23-year-old German is swinging freely, his forehand averaging 83mph off the ground. A far better start than in Friday’s semi-final.

Zverev wins the first point on Thiem’s serve, taking control of a 14-shot rally early and closing it out with a forehand volley winner. Thiem then double-faults for 15-30 then makes an unforced error early in a rally for 15-40. Two break points for Zverev. Thiem saves the first with a backhand volley winner but Zverev converts the second for the early break. Thiem is struggling with his first serve early: he’s only got two of 10 in so far and won three of 11 first-serve points.

Zverev answers with an easy opening service game of his own, closing out the hold with a 136mph ace out wide followed by a 135mph ace down the middle.

Three years after Vogue magazine tabbed Thiem and Zverev as the sport’s next big stars in its September issue, one of them will finally break through for their first career major championship today. 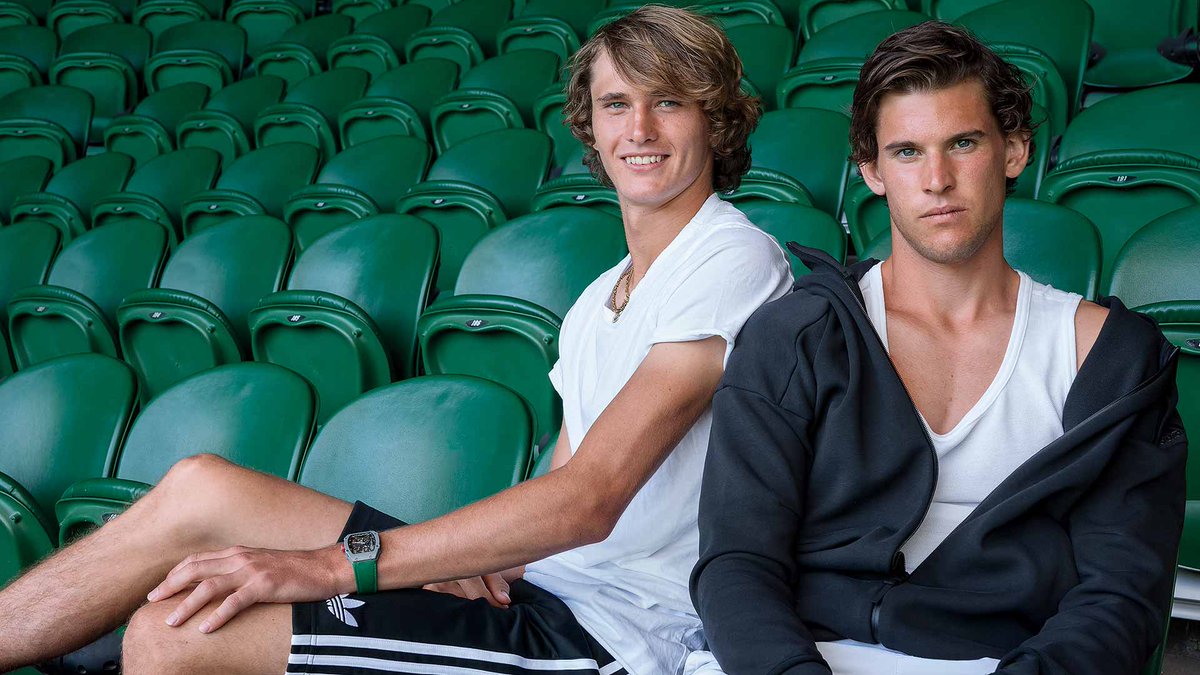 This year’s US Open finalists as photographed by Thibault Montamat for the September 2017 issue of Vogue. pic.twitter.com/47ZeBopPcm

Zverev is the youngest men’s grand slam finalist since Novak Djokovic, who was also 23 years old when he reached the 2010 US Open final. He’s looking to become the youngest major champion since Juan Martin del Potro, who was 20 when he won at Flushing Meadows back in 2009. He can also become the first German man to win a major since Boris Becker at the 1996 Australian Open and would join Becker as only the second man from Germany to win the US Open.

This is also the youngest grand slam final since Djokovic, then 24, faced Nadal, 25, in the 2012 Australian Open final – and assures us the first ever major champion born in the 1990s and 63 straight born in the 80s.

Thiem can become only the second Austrian grand slam champion after Thomas Muster, the 1995 French Open champion. As mentioned, he is looking to win his first major title in his fourth appearance in a final. The other four men in the Open era who lost their first three major finals each went on to win at least one: Goran Ivanisevic (who broke through at 2001 Wimbledon), Andy Murray (2012 US Open), Andre Agassi (1992 Wimbledon) and Ivan Lendl (1984 Roland Garros).

Tale of the tape

Hello and welcome to Arthur Ashe Stadium for the US Open men’s singles final between Alexander Zverev and Dominic Thiem. Today’s showdown between two of the tour’s most promising young talents of the past few years will see a first-time grand slam champion on the men’s side for the first time since Marin Cilic won the 2014 US Open. It’s the 23-year-old Zverev’s first major final and the 27-year-old Thiem’s fourth after losses to Rafael Nadal at the last two French Open and a defeat to Novak Djokovic in the Australian Open earlier this year.

Here’s a look at how they compare. Thiem has won seven of their nine tour meetings including their most recent showdown, a four-set blockbuster in the Australian Open semi-finals.