Singapore is battling new clusters of coronavirus infections in migrant dormitories that had won the all-clear from authorities, highlighting the difficulty of stamping out the disease, even in a closely monitored population, . reports.

As the wealthy city-state tumbled into recession, officials facing intense pressure to revive the economy are opting for limited isolation measures rather than the wide clampdowns earlier, but most low-wage workers are still penned in.

“There is little choice,” said Leong Hoe Nam, an infectious diseases expert at the city’s Mount Elizabeth Hospital. “We need to be realistic. We need the economy to go on.” 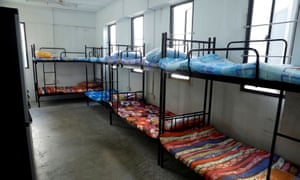 View of a dormitory room for migrant workers who have recovered from coronavirus amid the outbreak in Singapore, 15 May 2020. Photograph: Edgar Su/.

The dormitories, home to more than 300,000 workers in industries such as construction and shipbuilding, with several allocated to a room, contribute nearly 95% of Singapore’s tally of more than 57,000 infections.

When authorities uncovered the virus raging through the dormitories they sealed off their occupants, launched vigorous testing and ordered a nationwide lockdown.

Still, an average of 45 daily new infections has shown up there since authorities declared last month that all residents had recovered or been shown by testing to be virus-free. Outside, the daily average is just two local cases.

Jacinda Ardern, New Zealand’s prime minister, is explaining the decision to leave current Covid-19 restrictions in place for at least another week. In June, the country returned to almost-normal life – at least domestically – after the coronavirus appeared to have been eliminated.

But in Auckland, a resurgence of the virus has prompted the reintroduction of some restrictions.

“Within the Auckland cluster is a potential trouble spot,” Ardern told reporters on Monday, after speaking to her cabinet about the decision to retain restrictions. A new sub-cluster that had emerged in the past fortnight had led to 15 new cases, and it raised the possibility that “more people had been exposed,” she said.

Cases in the community continued to emerge every day, Ardern added.

“New Zealand has followed a plan that has worked,” she said, referring to the strict and early lockdown she imposed in March, which has been widely credited with the country’s earlier elimination of the virus. “Since the start we have been cautious.”

New Zealand will remain at its current Covid-19 alert level for at least another week, the prime minister Jacinda Ardern has just said at a news conference.

The country is currently under low-level restrictions due to continued community transmission of the coronavirus in Auckland, New Zealand’s largest city. Physical distancing is required, and masks are legally mandated on public transport.

Social gatherings in Auckland are limited to 10 people, and the rest of the country is limited to 100. The gathering limits for Auckland will be reviewed on 21 September, said Ardern, who is speaking to reporters in the city of Dunedin.

Restrictions on the rest of New Zealand will be reviewed on 21 September too – if the virus remains contained, the country outside of Auckland would move to the lowest restriction level.

Ardern said physical distancing restrictions on planes and public transport – which required empty seats to be left between passengers – would be removed today, with masks still required.

There are 96 active cases of Covid-19 inNew Zealand. There have been 23 deaths since March, and 1,447 cases total.

Nothing short of force majeure will prevent Yoshihide Suga from becoming Japan’s prime minister when the ruling Liberal Democratic party (LDP) elects a leader to replace Shinzo Abe this week.

Suga has emerged as the clear favourite to replace Abe, who is resigning on health grounds, since securing the support of key LDP factions. After what observers predict will be a comfortable victory over his rivals, the party’s policy chief, Fumio Kishida, and Shigeru Ishiba, a former defence minister, Suga is practically assured of being approved as prime minister in the lower house of parliament on Wednesday.

Suga’s status as a relative outsider could serve him well as he attempts to steer Japan out of a prolonged recession worsened by the coronavirus pandemic, according to Tobias Harris, a Japan expert at Teneo Intelligence in Washington and the author of a new book on Abe:

French Polynesia has recorded another 67 Covid-19 cases in the past 24 hours, raising its total to 1,020.

Of those cases, 958 have been detected since August, when the government and the French High Commission re-opened borders and abolished quarantine restrictions for tourists.

On 9 August, there were just 69 infections. Since that date – five weeks ago – the number of confirmed cases has increased exponentially, up nearly 1500%. 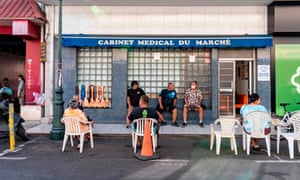 People wait at the doctor’s office near the market in Papeete, French Polynesia on 25 August 2020, amid the coronavirus pandemic. Photograph: Suliane Favennec/./.

The infections in French Polynesia have only caused two fatalities, a couple in their 80s in the capital Papeete. The majority of infections are on the island of Tahiti, but others are in Mo’orea and Hao.

A small rally in Papeete over the weekend protested a new mask-wearing mandate, introduced to try to slow the current outbreak.

Masks are compulsory in enclosed public places and on public transport while school students older than 11 must also wear them.

Still in the UK, tens of thousands of pubs, bars, nightclubs and gig venues will not survive increased coronavirus-prevention measures, such as local lockdowns and evening curfews, unless they receive fresh state support, the UK government has been warned.

One in four of the 115,000 licensed premises in Britain still had not reopened by the end of August after restrictions were imposed to contain Covid-19, according to data from the analysis firm CGA and AlixPartners.

With concern growing about rising infection rates, a ban on gatherings of more than six people comes into effect across England on Monday, while Scotland and Wales have their own amended restrictions:

Police chiefs have urged the public in England to take personal responsibility and observe the new “rule of six” regulations following a weekend rife with illegal gatherings.

Overall crime dropped dramatically during the coronavirus lockdown, when police were handed powers to enforce regulations designed to limit the spread of the disease. But Martin Hewitt, the chair of the National Police Chiefs’ Council, said demand for the police was now close to that before the outbreak of the pandemic and urged the public to do their part by limiting gatherings indoors and outdoors to six people:

Australia’s second most populous state of Victoria on Monday reported seven deaths from the new coronavirus in the last 24 hours and 35 new cases, its lowest daily rise in infections since late June.

#COVID19VicData for 14 September, 2020.
Yesterday there were 35 new cases reported and 7 lives lost. Our thoughts go out to all those affected.
More information will be available later today. pic.twitter.com/jApb1qnkTW

The state has eased some restrictions in its largest city Melbourne from Monday by shortening the overnight curfew by an hour and doubling the amount of time people are able to spend outside to two hours per day.

Victoria has continued a steady downward trend in daily cases in recent days with the rise in infections falling to double digits thanks to the hard lockdown from a peak of more than 700 cases in a single day in early August.

The southeastern state, which is at the centre of the coronavirus outbreak in Australia, reported 41 cases and seven deaths a day earlier.

Israel will enter a three-week nationwide lockdown starting on Friday to contain the spread of the coronavirus after a second-wave surge of new cases, prime minister Benjamin Netanyahu said on Sunday, becoming the first country worldwide to reimpose a strict national lockdown.

. reports that during the lockdown, which comes during the Jewish high-holiday season, Israelis will have to stay within 500 metres of their houses, but can travel to workplaces that will be allowed to operate on a limited basis. 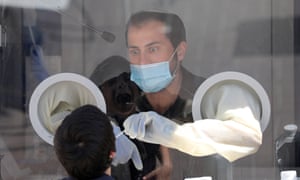 Schools and shopping malls will be closed but supermarkets and pharmacies will remain open. The public sector will operate with fewer staff, but non-governmental offices and businesses will not have to close, as long as they do not accept customers.

“I know those measures will exact a heavy price on us all,” Netanyahu said in a televised address. “This is not the kind of holiday we are used to. And we certainly won’t be able to celebrate with our extended families.”

Netanyahu, who has faced increasing criticism over his handling of the coronavirus crisis, said he instructed his finance minister to come up with a new economic package to assist businesses hurt by the lockdown.

Of that record one-day case increase, the largest individual country infection totals were from India, the United States and Brazil, according to the WHO.

Both the US and India each reported over 1,000 new deaths and Brazil reported 874 lives lost in the past 24 hours.

Hello and welcome to today’s live coverage of the coronavirus pandemic.

My name is Helen Sullivan and I’ll be bringing you the latest global Covid-19 news for the next few hours.

As always, it would be great to hear from you. You can find me on Twitter @helenrsullivan email: [email protected]

Here are the key developments from the last few hours:

The World Health Organization reported a record single-day increase in global coronavirus cases on Sunday, as the tally surged by a further 307,930 infections in just 24 hours.
Israel’s government will impose a new three-week nationwide lockdown that will start on Friday, after the rate of infection during the past two weeks became the highest recorded since the outbreak began.
South Africa’s finance minister, Tito Mboweni, warned Sunday the economy could shrink by more than the 7% forecast for 2020, stressing that public finances are “overstretched”.
Spain plans to extend until the end of the year a measure preventing employers from using the coronavirus pandemic as an excuse to fire staff.
Johnson & Johnson’s Janssen unit will begin mid-stage trials of its Covid-19 vaccine in Spain on Monday.
Saudi Arabia will partially lift its suspension of international flights as of 15 September to allow “exceptional categories” of citizens and residents to travel.
Around 4,000 health workers demonstrated in Brussels on Sunday, calling for more spending on the healthcare system.