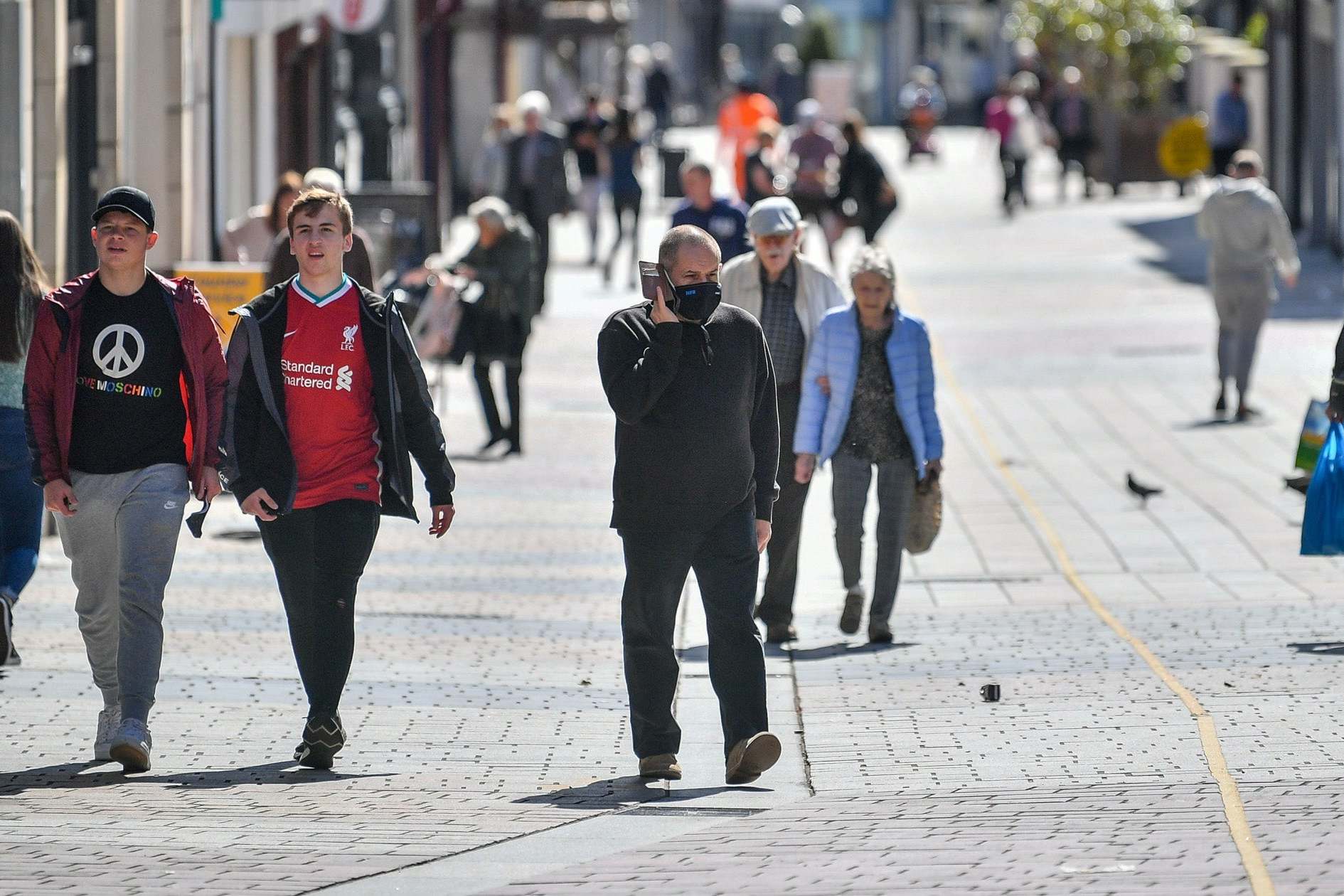 New local lockdown restrictions and tough new fines for failing to self-isolate come into force across parts of the UK today.

People across England will be legally required to self-isolate from this week if they test positive for coronavirus or are contacted by the test and trace service. If they do not they risk being hit with new fines starting at £1,000 and increasing up to £10,000 for repeat offenders or serious breaches, the Government said.

Under new rules in England wedding ceremonies will also be restricted to 15 people from Monday. Meanwhile, three more council areas in South Wales will go into local lockdown from 6pm on Monday, the Welsh Government announced. Bans on households mixing came into force in Wigan, Stockport, Blackpool and Leeds on Saturday.

It comes amid reports the Government is planning an « emergency ban » on socialising across London and north England to curb the spread of coronavirus. Under the plans being considered, all pubs, restaurants and bars would be ordered to shut for two weeks initially, and households would also be banned indefinitely from meeting each other indoors.

Health minister Helen Whately has said the Government could not rule out further restrictions if coronavirus infections continued to rise.

“We don’t want to bring in more restrictions but of course we keep a constant eye on what’s going with the Covid rates and we have seen these upward trends in recent weeks,” she told Sky News.

“This is the moment in time we have an opportunity, we have a choice as a country to get this back down under control.

“We have to break these chains of transmission. That’s the way we get the rates back down again. We have seen them going up again in the last two weeks.”

“It’s a key public service and when it doesn’t work, then we all suffer.”

He said that going into winter, the country would need “probably four times as many tests as we’ve currently got”.

And he said there was a need to build testing facilities much closer to where people live and work, and reduce turnaround times for results.

Fines of £10,000 for refusing to self-isolate come into force across England

New local lockdowns, further restrictions and tough new fines for failing to self-isolate come into force across parts of the UK on Monday.

People across England will be legally required to self-isolate from this week if they test positive for coronavirus or are contacted by the test and trace service.

If they do not they risk being hit with new fines starting at £1,000 and increasing up to £10,000 for repeat offenders or serious breaches, the Department of Health and Social Care said.

People who test positive for Covid-19 will also be fined if they knowingly provide false information about close contacts to the test and trace service.

Under new rules in England wedding ceremonies will also be restricted to 15 people.

Meanwhile three more council areas in South Wales will go into local lockdown from 6pm on Monday, the Welsh Government has announced.

Good morning and welcome to our live coronavirus coverage.

That’s all for our live coronavirus coverage tonight.

Labour has warned that more than a million workers are being “consigned to the scrap heap” in a fresh attack on the Government’s Job Support Scheme.

The party have said that sectors of the economy that generate billions in tax revenue and employ huge numbers of workers are not covered by the plans.

Worldwide Covid-19 deaths hit one million, according to latest data

The number of people who have died of coronavirus around the world has passed the grim milestone of one million, according to the latest data.

So far 1,000,502 people have died, according to Worldometer, which calculates the totals from sources including governments and NGOs across the globe.

Ministers are under mounting pressure to review the « hard » 10pm curfew on pubs, bars and restaurants.

It comes amid heavy criticism that the new rules are leading to revellers filling streets en masse.

Crowds of people were pictured on Saturday night gathering in city centres and piling onto public transport. Meanwhile, long queues formed at off licences after venues kicked customers out at 10pm.

Could the UK see a series of « mini national lockdowns »?

Coronavirus infections have continued to rise sharply in the UK in recent weeks. This has prompted warnings that the country could soon see up to 200 deaths from the virus each day.

WORLD: Children to return to school as Melbourne eases lockdown

Australia’s second largest city, Melbourne, has further eased lockdown restrictions imposed after a surge in coronavirus cases, allowing most children to return to school from next month and sending more than 125,000 people back to work.

That allowed Victoria state premier Daniel Andrews to confirm the 9pm to 5am curfew would be lifted from 5am on Monday, though residents still could not travel more than five kilometres (3.1 miles) from home. Public gatherings of up to five people from a maximum of two households would be allowed. Masks would remain mandatory.

A further easing could take place on October 19 if the average falls below five new cases per day.

Mr Andrews said there were 399 active cases in Victoria, the first time that number had fallen below 400 since June 30.

“It’s one measure among many of the amazing performance of the Victorian community — staying apart but sticking together, making sure that we defeat this second wave,” he said.

Matt Hancock has urged even more people to download the app:

More than 10 million people have downloaded the NHS Covid-19 app despite the technology being dogged with problems.

Matt Hancock announced on social media that the download figures showed an “absolutely fantastic” response since it was launched. The Health Secretary then urged even more people to download the app.

UK coronavirus cases soar by more than 5,600 as death toll rises by 17

A further 5,693 people have tested positive for coronavirus with the UK death toll rising by 17. As of 9am on Sunday, the Government said 5,693 more lab-confirmed cases had been confirmed.

The total number of confirmed cases in the UK since the pandemic began now stands at 434,969. The Government also said a further 17 people had died within 28 days of testing positive for Covid-19 as of Sunday. This brings the UK total to 41,988.

The Government said that, as of 9am on Sunday, there had been a further 5,693 lab-confirmed cases of coronavirus in the UK, taking the overall number of cases confirmed to 434,969.

The Government also said a further 17 people had died within 28 days of testing positive for Covid-19 as of Sunday.

Separate figures published by the UK’s statistics agencies show there have now been 57,600 deaths registered in the UK where Covid-19 was mentioned on the death certificate.

A number of Manchester Metropolitan University students self-isolating in a Covid-19 lockdown have raised claims they are being falsely imprisoned.

Lawyers at a chambers which specialises in human rights and civil liberties have also questioned the legality of security staff enforcing the 14-day isolation of 1,700 students at two accommodation blocks in the city.

While a Liverpool-based law firm appealed through social media to students at Birley campus and Cambridge Halls to seek its help “pro bono”.

Students described being scared and confused as their accommodation was locked down on Friday after 127 people tested positive for coronavirus.

Three more local authorities in South Wales will go into local lockdown from 6pm on Monday, a day after large swathes of the area are hit by new restrictions, the country’s government has announced.

Neath Port Talbot, Torfaen and the Vale of Glamorgan will be covered by the coronavirus restrictions, which mean people will not be able to enter or leave the areas without a reasonable excuse.

A further 17 England hospital deaths within 28 days of a positive test have been recorded over the past 24 hours, bringing the total number of confirmed deaths reported in hospitals to 29,908, NHS England said.

Patients were aged between 49 and 93 and all, except one aged 59, had known underlying health conditions.

Bercow blasts PM for ‘sub-Churchillian soundbites’ instead of facing scrutiny

Mr Bercow told BBC Radio 4’s World This Weekend: “Parliament has been unavoidably constrained by Covid-19 but it should not now avoidably constrain or hamper itself. Debate, scrutiny and votes are the lifeblood of a pluralist system.

“Without them – and they are tremendously important safeguards – what you have is Government by executive fiat and it seems to me that there is a world of difference between the situation six months ago and that which pertains today.”

It comes as a major Tory rebellion against Downing Street’s « rule by diktat » on strict coronavirus rules gathers pace, threatening to force the Government to put lockdown measures to votes in Parliament.

Mr Bercow, a former Conservative MP, went on: “If Governments feel that they can bypass or circumvent or stymie the voice of Parliament, if they don’t really feel the need to consult the legislature any more, well then they will just do things their own.

“What I say is that the toolkit of Trumpianism – if you will, press conferences, sub-Churchillian scripted soundbites in television addresses to the nation or simply taking to Twitter – is not good enough.

“It is no substitute for that age-old, tried and tested, invaluable mechanism called accountability to Parliament. So ducking, diving, dodging scrutiny, of which there has been some evidence in recent times, cannot continue.”

A total of 344 people have tested positive for coronavirus in Scotland in the past 24 hours, the Scottish government has announced, bringing the total during the crisis to 27,576 .

This is a 9.1% positivity rate of newly-tested individuals, down from 11.5% the previous day.

Of the new cases, 172 are in Greater Glasgow and Clyde, 58 in Lanarkshire and 40 in Lothian.

One new death of a confirmed Covid-19 patient has been recorded in the past 24 hours, putting Scottish total at 2,511.

There are 105 people in hospital confirmed to have the virus, up by six in 24 hours. Of these patients, 12 are in intensive care.