Louise Taylor was at St James’ Park, and her verdict has landed. You know what to do: clickety click. Thanks for reading this MBM.

Steve Bruce talks. “We got off to an awful start … first half in particular maybe we were a bit too passive … second half was much better but you open up and they can pick you off … our best spell in the game was unfortunately when we conceded the second one … we had one or two opportunities but didn’t quite take them … maybe we were too deep in the first half and gave them a bit too much respect … they’re a very good side and can expose you … there’s always grumbles … it was a difficult afternoon.” He also reports that Lascelles’ injury is “a strange one … he ran out to test his knee then felt his thigh … but we hope he’s not too bad”.

Frank Lampard talks to BT Sport. “We played well … the second goal was so important and we hand chances to score it earlier … but you can’t have it all your own way … we put the game away very well in a professional performance … in the first half we were great … we had control and penetration … the result is key because the Premier League is tough and relentless … I’m very pleased … I’m not going to get excited about going top for five minutes, it’s time to stay humble … it’s a long race.”

Tammy Abraham speaks. “It’s a fantastic result. We dug deep. It’s never an easy place to come and get three points, but we did that today. We didn’t let the international break distract us. We had to come out all guns blazing and that’s what we did. We kept our confidence and kept going. Obviously top is where we want to be. We need to keep getting the three points and hopefully we’ll stay there.”

Newcastle usually give Chelsea a hard time at St James’ Park. Not today. They were utterly impotent. Chelsea didn’t have to get out of third gear to cruise to the top of the Premier League. Frank Lampard has turned his side, seven games unbeaten now, into genuine title contenders. 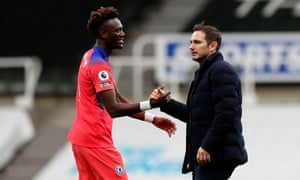 90 min +2: Carroll romps down the left. He hasn’t scored in the Premier League for two-and-a-half years … and the wait goes on as his low shot is deflected into the side netting. Nothing comes of the resulting corner. 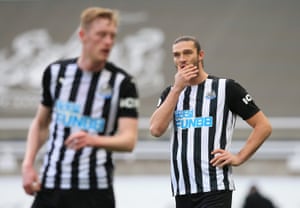 90 min: There will be three extra minutes … but this has been over for a long while now.

89 min: James loops in from a deep position on the right. Giroud sticks out a leg, hoping to steer a volley into the bottom right, but it’s always screwing wide and the flag goes up in any case. 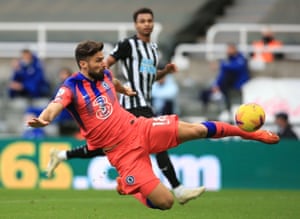 88 min: James stands on Longstaff’s toe. Free kick to the left of the Chelsea box. Longstaff stays down a while, grimacing with pain. But eventually he springs back up again. Newcastle load the box. Almiron looks for Carroll but James gets in the road and nuts clear.

87 min: Ziyech comes off, in his own sweet time, to be replaced by Giroud. Meanwhile corner for Newcastle on the left … but it’s a complete non-event.

86 min: Newcastle ping it around in Chelsea’s half, but don’t really build any pressure.

84 min: Lewis crosses from the left, but the ball flies high above Carroll. Newcastle have barely threatened Chelsea today.

83 min: James slips Ziyech into space on the right. Corner. Zouma tries to get another header away but can’t connect properly this time.

79 min: Almiron opens his legs down the left and batters a rising shot towards the top left. The ball takes a nick off Zouma, forcing Mendy to turn around the post for a corner.

78 min: A long Kovacic pass down the right. Mount spins Fernandez with absurd ease, and should make it three, clear in the box. But he scuffs his shot across Darlow and wide left. Chelsea have passed up some chances today. 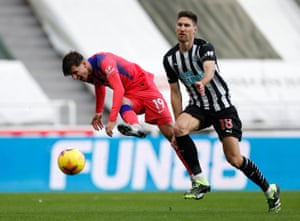 75 min: Ziyech draws three players before slipping a pass down the inside-left channel to release Werner. The striker rounds Darlow on the left and slots home. But he’d gone too early, and the flag correctly goes up for offside.

72 min: Sean Longstaff nearly scores one of the goals of the season. A corner on the right is worked back up the flank. Longstaff takes a touch, 30 yards out, and sends a fierce short-backlift riser towards the top left. Mendy is beaten all ends up, but the ball pings off the top of the crossbar. So close to an absolute stunner.

71 min: Schar romps down the middle and trips over his own feet. The ref gives him a free kick. There haven’t been any hugely controversial calls today … but there have been some strange decisions.

69 min: Almiron’s first act is a saucy dummy that sends Joelinton romping down the right wing. Joelinton wins a corner off Zouma, but the flag goes up for an absurd offside decision – the striker was clearly on – and it’s a free kick to Chelsea.

67 min: Chelsea are heading for the top of the table, for a few hours at least. It’s not all great news, though, because James is down again. Once more, he decides he’s good to continue, but let’s see how much longer he lasts. No point taking risks. Meanwhile Newcastle replace Manquillo with Almiron.

Chelsea counter at lightning speed. Werner drives with extreme prejudice at Schar, eating up the yards down the left channel. He’s got Schar on toast, scooting past him, then rolling to his right for Abraham, who batters a shot off the base of the right-hand post and in. What a scintillating break! 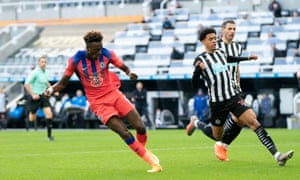 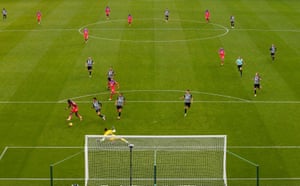 Here’s the view of Abraham’s goal from up in the stands. Photograph: Lee Smith/NMC Pool/. 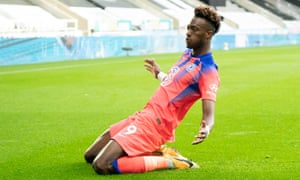 64 min: Manquillo drives at Chelsea but can’t find Saint-Maximin in acres of space on the left. A big mistake, because …

62 min: Abraham glides down the inside-left channel. He’s got Werner in the middle, but opts to continue probing himself. Not the correct decision, as it pans out.

61 min: James goes down holding the back of his leg. He springs back up and gets on with it, but doesn’t look totally comfortable.

60 min: Saint-Maximin comes in from the left and tees up Joelinton, on the edge of the D. Joelinton has time to sort his feet and open his body up, but his attempted curler towards the top right is high and wide. Chelsea are beginning to ship chances here.

58 min: Hayden bustles down the middle and loses control. Rudiger attempts to boot clear, but slams the ball straight at Hayden, who suddenly breaks free into the box! He must score, but leans back and hoicks over. No matter, as the referee had blown for hand ball. That might give Newcastle some heart, though.

57 min: Chilwell whips from the left to the far post. Ziyech is romping in, planning to meet it with his head. Lewis gets there first, though, eyebrowing the ball away from the Chelsea man just in time.

55 min: James wins a corner down the right. Zouma rises to win a header, flashing wide right from eight yards. Had that been on target, Darlow was rooted and beaten. Chelsea should be out of sight by now.

53 min: Schar takes receipt of a poor long Chelsea punt. He dallies and dallies, and allows Werner to steal it away. Werner enters the box from the left. He’s one on one with Darlow, and scoring looks a simple job, but he decides to roll across to tee up Ziyech, allowing Clark is able to intercept and clear. What a chance! Not the first time Werner’s decision-making has been a bit suspect today. He should really have two.

49 min: Stop. Start. Stop. Start. Neither team has found any rhythm yet. A series of petty fouls not helping.

47 min: A slow start to the half. Fernandez breaks the space-time continuum to take half an hour over a throw.

Newcastle get the second half underway. Just before the restart, Lascelles took to the pitch but quickly decided he wasn’t fit to continue. Schar comes on in his place.

Half-time entertainment courtesy of Oliver Lewis. “Apologies to go on a bit of a rant, but can you answer me, watching Steve Bruce’s football, why Newcastle fans are constantly called entitled for daring to suggest the absolute garbage he serves up regularly is not what we want to watch? It is effective, we get enough points to stay up but it is dreadful.

“It is constantly brought up that we were no more attacking under Rafa. Yes we were fairly negative the majority of Rafa’s time. However for his last six months, Rafa had finally found a more exciting system that may have been counter attacking but led to us scoring plenty of goals and playing the best football we have for years.

“Rafa walks as Ashley finally commits to spending £40m but only on Joelinton rather than the cheaper and proven Rondon and reinforcing. That does not look so unreasonable a call now does it? Bruce comes in. Gets financial backing. Drops all our players who can pass the ball and serves up utterly dreadful football, continually blaming Rafa for training our players to be too effective defensively.

“No Newcastle fan ‘expects’ us to be challenging for anything more than midtable considering the investment involved. We are continually patronised as if hoofing it up the pitch is all we should rightly expect. I am reminded of when Brendan Rodgers brought his Liverpool to Sunderland and said he thought the people of the north east would be honoured to see the football he brought.

“I am tired at looking enviously at clubs coming up from the Championship on half the budget looking like Barcelona compared to us. Good football brings joy and excitement. Functional hoofing our way to 15th does not.

“Everyone says Bruce is a nice guy, it’s why a lot of pundits have a lot of time for him. He is also not the root cause at all. But Newcastle are entitled to call BS that Bruce is doing a ‘brilliant job’. This is the endless modern limbo of Newcastle: utterly joyless, utterly sapping and utterly hopeless.

“Rant over, and of course now Bruce will go on to score a fluky win to make me look stupid.”

Chelsea have been dominant and deserve their lead … but they got a little bit sloppy towards the end of that half, giving up possession and a couple of half-chances that’ll give Newcastle a little succour. More soon!

45 min +1: Lascelles is down again, feeling the back of his knee. Don’t bank on him coming back out for the second half.

45 min: Murphy is booked for barging into the back of Mount. There wasn’t too much in that one, either, but the referee is in an uncompromising mood this afternoon.

44 min: Saint-Maximin slides Lewis into space down the left. Lewis crosses deep. Murphy heads down to nobody in particular. Chelsea clear.

43 min: All a bit scrappy now, as both teams take turns to give the ball away.

41 min: Ziyech curls it towards the far post. Too high, too floaty. Easy for Darlow.

40 min: Hayden is booked for getting both ball and man as he slides in on Kovacic. He’s not happy. That looked nothing more than a garden-variety foul. Free kick, anyway. A dangerous position for Chelsea out on the right.