The Disunited States of America are united once more. After a brutal election that exacerbated bitter partisan divisions and left the country feeling as though it had been torn in two, it has at last been thrown back together.

For all the wrong reasons.

The great leveler is coronavirus. Covid-19 is rampaging across the US as though it were on a personal mission to unify the splintered nation in an unfolding catastrophe. Of the 50 states of the Union, all but one – isolated Hawaii – is seeing alarming spikes in new cases. The virus is on the rise so uniformly across the vast landmass of the US, that records are being shattered daily.

Almost 12m cases have been recorded. In just one day the US notched up 184,000 new cases – six times the total number of infections in South Korea since the pandemic began.

Almost 80,000 Americans are currently in hospital fighting for their lives, and the death rate is soaring inexorably towards 2,000 a day – close to the peak reached in April.

This week the country passed the grimmest landmark so far: 250,000 dead Americans. And already the total has gone up significantly beyond that tragic milestone.

As Michael Osterholm, a member of the coronavirus advisory team assembled by Joe Biden, put it: “We are in the most dangerous public health period since 1918.”

The result of this terrifying march of untrammeled disease is that panic has begun to set in at state level. Governors and mayors from coast to coast have been scrambling to batten down the hatches, from New York City where the country’s largest public schools system was closed on Thursday barely two months after it reopened, to California where governor Gavin Newsom announced he was “pulling the emergency brake”.

It is in the heartland states that the true horror of the current crisis is unfolding. Here Donald Trump’s historic mishandling of the pandemic is coming home to roost.

Across the midwest, Trump’s playbook towards Covid-19 has been avidly embraced by Republican governors, from Kristi Noem in South Dakota, to Pete Ricketts in Nebraska, Kim Reynolds in Iowa, and Mike Parson in Missouri. They have mimicked the president’s relentless downplaying of the virus, lying about the pandemic being under control, and spurning of mask wearing.

Only now, when the virus is pummeling the midwest like a tornado, have some of the Republican governors begrudgingly begun to change tack. Take Reynolds, the pro-Trump governor of Iowa. 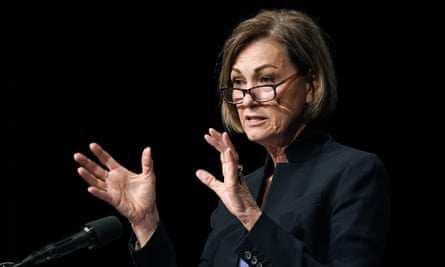 She has pulled back from her refusal to impose a mask mandate after her state confronted its largest one-day increase in coronavirus deaths to at least 40. Iowa is now struggling with one of the worst outbreaks in the US with hospitals jammed with Covid-19 patients.

Reynolds spent months resisting calls from health specialists and doctors to require masks on the grounds, saying they were “no silver bullet”. That’s a position that’s hard to hold when new infections are running at about 100,000 a month.

Reynolds finally shifted after the White House coronavirus task force called the state’s measures to combat the pandemic “inadequate” and warned that doing nothing would cost thousands more lives. “The spread in Iowa is exponential and unyielding,” the task force said in a report this week.

The governor ordered people to wear masks in indoor public spaces with some exceptions such as eating in restaurants. She also banned gatherings of more than 15 people indoors and twice that outdoors, except in the “ordinary course of business”, while requiring bars and restaurants to close by 10 pm.

Despite it all, Reynolds remains firmly attached to her cultivated ambivalence over masks. She urged Iowans to “err on the side of caution” and wear one yet continues to question their value by saying there is “science on both sides”.

“If you look, you can find whatever you want to support wherever you’re at,” she said at a press conference to announce the mask mandate.

Reynolds’ limited measures, and the seeds of doubt she continues to plant around the science, have been criticized by some healthcare workers. Eli Perencevich, a doctor and professor of epidemiology at the University of Iowa, derided them as insufficient.

“Ask yourself this: 1) does the virus only spread after 10pm 2) if you don’t need to wear a mask unless you will be next to someone for 15 minutes, will you ever need wear a mask? The answer to both of these questions is no,” he tweeted.

In her controversial mini-Trump stance, the governor has enjoyed consistent backing from the Republican US Senator from Iowa, Joni Ernst. The senator has gone one step further, speculating that doctors were exaggerating fatalities by pinning deaths from other causes on Covid-19 as a ruse to claim extra payments from the government.

The Iowa Medical Society described Ernst’s comments as “incredibly disappointing” and “mistruths”. But it is a sign of how closely aligned many midwest Republicans are with Trump that he, too, has run with the lie about doctors cashing in on Covid deaths.

In the final days of his presidential campaign, Trump caused widespread offense within the medical world by claiming without evidence that doctors were marking every death down as Covid-19 so they could grab more money.

Even Trump’s mendacious pronouncements on the pandemic could arguably be seen as preferable to his current posture. Since the election, he has spent his time fixating on the baseless claim that victory was stolen from him, firing top officials who refused to go along with his conspiracy theories about voter fraud, and playing golf.

As for Covid, his leadership has consisted of resounding silence. The last time he attended a meeting of the White House coronavirus task force was at least five months ago.

The combination of soaring disease and an AWOL president has left the 50 states to cope with a mounting disaster as best they can. The result is an even more extreme form of what has emerged since the start of the pandemic – the patchwork of individual state responses, some aggressive, others nonchalant – that have been cobbled together as the virus slams in. 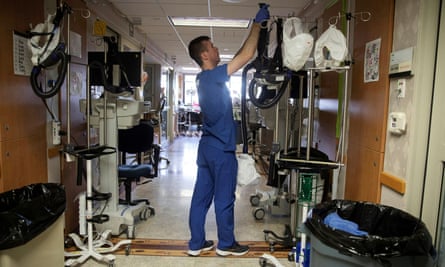 Wisconsin is another Midwest state that has quickly emerged as a major hotspot, with almost 3,000 deaths. The state now breaks records in new cases, hospitalizations and deaths almost daily, with public health officials warning that it “is at a critical juncture right now”.

“Our hospitals are overwhelmed, our healthcare workers are exhausted, and too many families have lost a loved one,” DHS deputy secretary, Julie Willems Van Dijk said.

On the empty streets of downtown Milwaukee, hotel staff take extended breaks outdoors while parking enforcement officers keep warm inside their vehicles. With the city experiencing an especially punishing spike in cases, there simply aren’t the residents or visitors to serve.

Like Iowa, Wisconsin has lacked basic coronavirus measures designed to curb the continued spread of the virus – though in this case, it is not for want of trying by the Democratic governor, Tony Evers. He attempted to enact a “Safer at Home” order only to have the move struck down by the state supreme court last spring.

The court now weighs whether the last remaining mask mandate should be blocked. Meanwhile, leaders across the state have urged Wisconsinites not to gather or travel, a difficult ask at the start of the holiday season in a state whose often bitingly cold winters force families indoors.

Milwaukee resident Caroline Gaeta, 58, has heeded the call. She usually travels to Indianapolis to share Thanksgiving with her 81-year-old mother, but decided to stay home citing the risk of exposing elderly loved ones.

“Traveling would not be a good option right now given the uptick in numbers in both Wisconsin and Indiana,” she said.

Since the beginning of the outbreak, the response in Wisconsin has largely fallen along political and racial lines. When the disease first struck, devastating mostly Black and Latino communities in Democratic cities like Milwaukee, Madison and Green Bay, white residents in surrounding suburbs and rural areas took aim at Ever’s state orders meant to combat the spread.

The backlash has been amplified by Republican lawmakers who have pushed to block coronavirus legislation.

Such sharp partisan battles in Wisconsin are being repeated in states across the country. They are a measure of the challenges that lie ahead for Biden as he struggles to effect a nationwide heave to contain the disease. 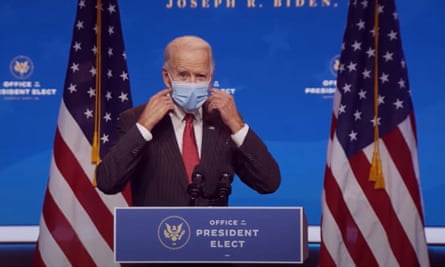 Biden, who put combatting Covid as the top priority of his presidential campaign, has moved swiftly to convene a 13-member advisory panel on coronavirus. The group has been doing all it can to ensure it hits the ground running on inauguration day, 20 January, but its work is impaired by the willful lack of any cooperation coming from the Trump administration.

Biden has warned that Trump’s refusal to share intelligence on such critical matters as how to distribute the vaccines that are close to fruition means that “more people may die”.

The vacuum at the center of the most powerful nation on Earth in grappling with the pandemic is not only being felt in the largely Republican-controlled states of the midwest. On the coasts, where Covid-19 first struck in January, Democratic leaders are also feeling the heat.

In California, cases have skyrocketed after weeks of low transmission rates and loosened restrictions, and the state now has the distinction of being only the second besides Texas to surpass 1m cases.

With daily case rates doubling over the last 10 days, Newsom has announced that 94% of Californians will come under severe coronavirus restrictions yet again. That includes requiring masks to be worn outside the home with rare exceptions.

Newsom issued a travel advisory last week asking that all Californians cancel out-of-state travel. To add insult to injury, Newsom was forced to apologise on Monday after attending the birthday of a friend and lobbyist at the upscale French Laundry restaurant in Napa county, north of San Francisco. 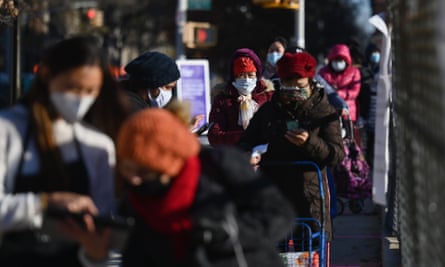 People stand in line at a food distribution event ahead of the Thanksgiving holiday on Friday in Brooklyn, New York. Photograph: Angela Weiss/./.

Political reputations are also being frayed over on the east coast. The governor of New York, Andrew Cuomo, was so self-satisfied with the way the virus was brought under control in his state after its terrifying surge in April that he wrote a book bragging about his leadership skills.

In American Crisis, Cuomo describes in glowing terms how he became a national sensation in his daily coronavirus briefings. The knack was, he writes, that he was “authentic and real”. “I felt the same emotions so many people were feeling, and I would acknowledge them and show them.”

That was then. At Wednesday’s coronavirus briefing he was so tetchy about being asked routine questions about the decision to close New York City schools as the virus gathers force once again that he lashed out at a reporter, snapping: “I don’t really care what you think”.

You can understand why Cuomo would be on edge. Hospitalizations in New York state are at their highest levels since June. In the city, lines outside Covid testing facilities have grown as the infection rate ticks up.

Jordana Shiau, 28, had been waiting for two hours for a Covid-19 test outside a City MD clinic in Greenpoint, Brooklyn. She estimated she had another hour before she would make it inside.

Shiau said she was wary of what was to come after having been in the city during the first wave, when hospitals were overwhelmed and almost 20,000 people died in less than two months.

“I’ve been here since March and there’s like a collective trauma. Hearing sirens 24 hours, seeing the freezer trucks full of dead bodies outside funeral homes. I’m pretty freaked out that it’s going to get back to that.”

Sydney Spence, 30, said he would not be traveling home for Thanksgiving this year. It will be the first time she has not spent the holiday with family.

“Obviously I miss them,” she said. “It’s sad. But I’d much rather know they’re safer. There will be more Thanksgivings.”