Better than the Scorchers could offer batting first yesterday but still under par on average first digs at North Sydney Oval. The Thunder will fancy their chances of defending it, however, on a deck that is holding the ball up just a little. The Heat were good with the ball and managed to take wickets at timely intervals to keep a Thunder breakaway at bay. The best partnership the Sydneysiders could muster was 27 and it took Rachael Haynes (48no) to bat through from No 4 to afford her team a competitive total. 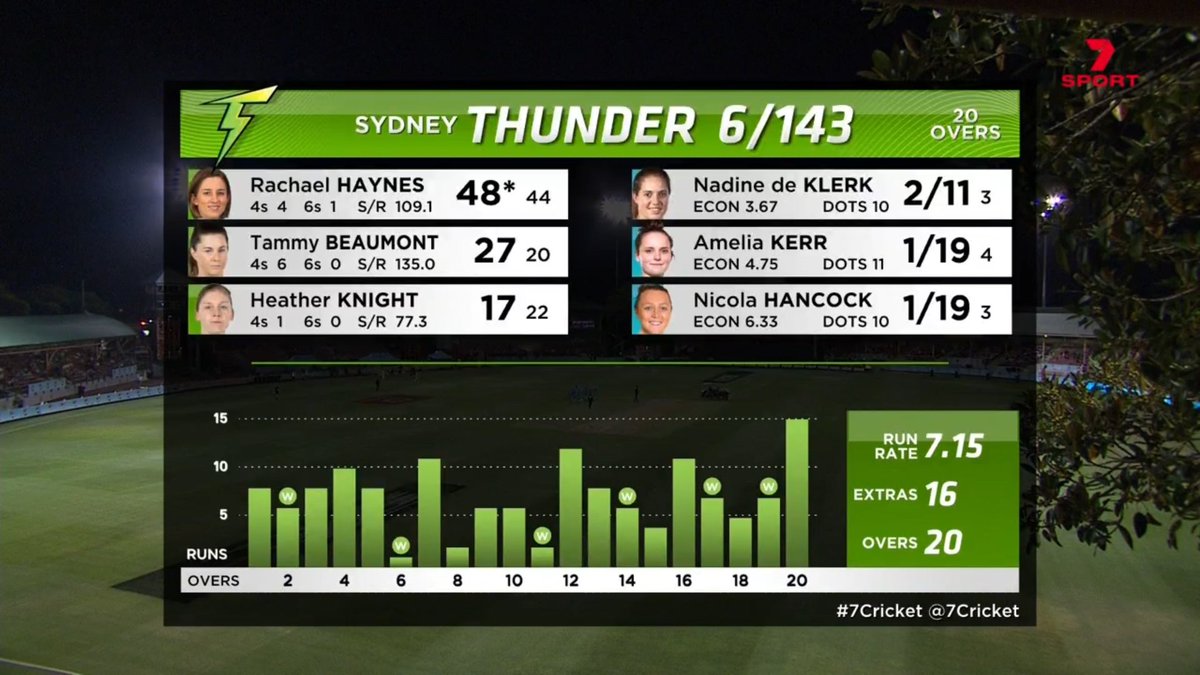 Who’s on top at the innings break? 🤔@ThunderBBL finish on 6/143 #WBBL06 pic.twitter.com/GoZbmtNFTH

20th over: Sydney Thunder 143-6 (Haynes 48, Darlington 2) Haynes opens the shoulders and clobbers D Kimmince straight down the ground for six. The seamer then takes the pace off the ball to stem the flow of runs. Haynes takes face for the final ball of the innings and gleefully sends a full-toss through midwicket for four. She ends the innings unbeaten on 48. Could well prove to be an important knock. 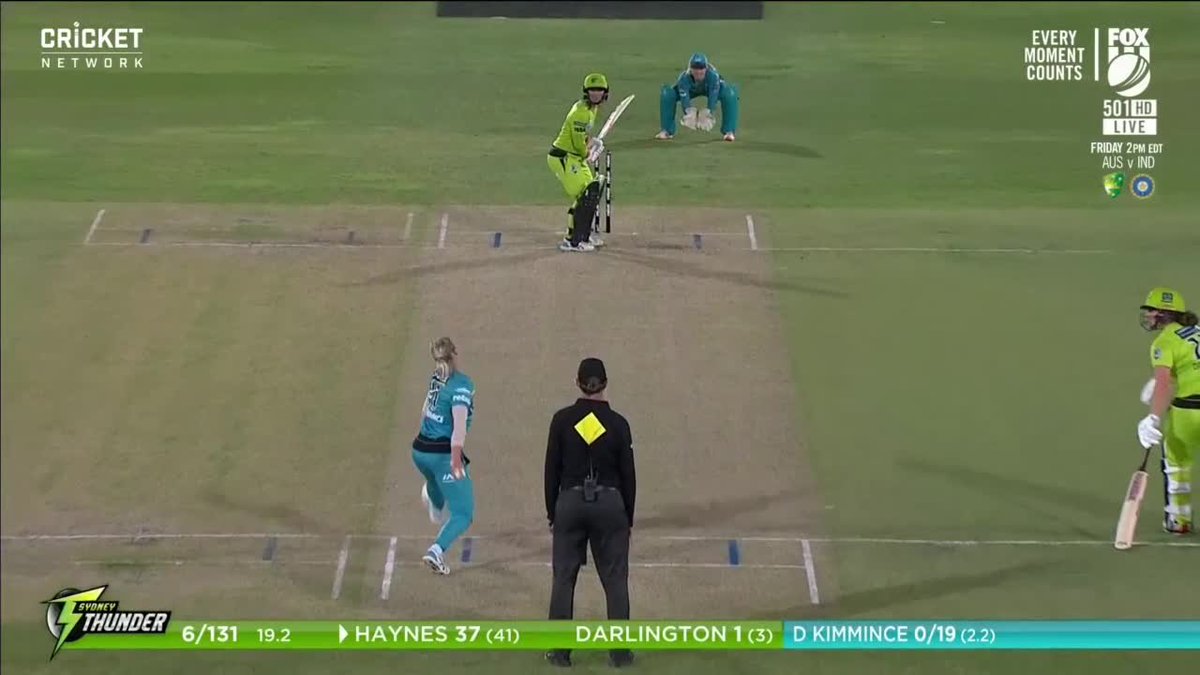 Big shot to get to a competitive total! #WBBL06 pic.twitter.com/8yntykCHtj

19th over: Sydney Thunder 128-6 (Haynes 35, Darlington 0) De Klerk on for the penultimate over. Will Haynes cut loose? The answer is no but Wilson does well to drive for two that would have been two more if not for an excellent stop in the covers by Jonassen. Wilson then goes again but this time leaves her crease and chases a wide, only to be stumped. Darlington can’t do much with the rest of the over and that’s a good return for the Heat in the penultimate over.

17th over: Sydney Thunder 116-5 (Haynes 33, Wilson 1) Sammy-Jo departs and it took a great catch in the deep to get rid of her. Johnson got plenty of her slog sweep and the ball, fast and flat, looked to be going for six before Prestwidge rose off the turf and poached an expert catch at deep midwicket. Superb catch. That’s why she’s there. 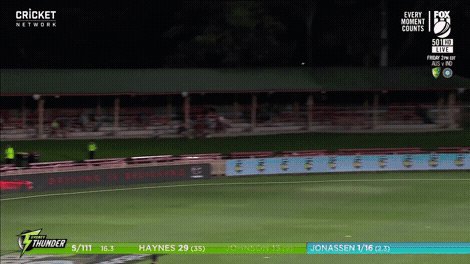 Another cracking catch to add to the #WBBL06 collection – batter up! pic.twitter.com/4voDL2dYc9

16th over: Sydney Thunder 109-4 (Haynes 28, Johnson 12) Prestwidge must’ve missed the memo: don’t bowl on Johnson’s pads! Consecutive boundaries through square commence the over – the second of which landed barely millimetres inside the rope – and more big shots follow but none gets past the fielders in the deep. Eleven off the over.

15th over: Sydney Thunder 98-4 (Haynes 27, Johnson 2) The Heat continue to take timely wickets but the Thunder continue to keep the score ticking over. Johnson is in the middle now and with five overs to go it’s fair to expect her and Haynes to go for it now.

14th over: Sydney Thunder 94-4 (Haynes 25) Now Litchfield gets in on the act, showcasing her own deft footwork before hammering Kerr to the long-on fence. But leggies love to buy their wickets and Litchfield goes again off the last ball of the over but fails to pick the wrong’un and is stumped. That old trick, eh? The third time Litchfield has been stumped this season.

A battle we’ll see for years to come, but tonight it’s Kerr who has the better of Litchfield #WBBL06 pic.twitter.com/xgw6lrlUW1

13th over: Sydney Thunder 88-3 (Haynes 24, Litchfield 2) Beautiful use of the feet from Haynes affords her time and space to cut behind point for four and more nice footwork later in the over earns a couple more over extra cover. Nice batting from a very nice batter.

12th over: Sydney Thunder 80-3 (Haynes 16, Litchfield 2) The Heat are – were? – doing well in the middle part of this innings and Hancock continued to keep it tight, until a flurry of wides later in the over, including one that beat the keeper and raced to the fence, turned a good over into a costly one. 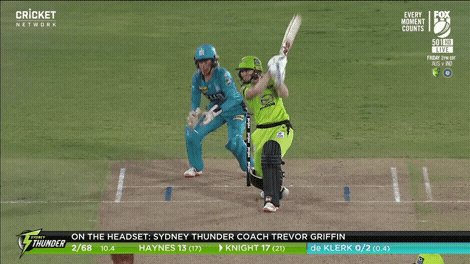 11th over: Sydney Thunder 68-3 (Haynes 13, Litchfield 0) De Klerk keeps the Thunder on a short leash in her first over and the pressure shows on an impatient Knight, whose rash cover drive picks out the fielder. 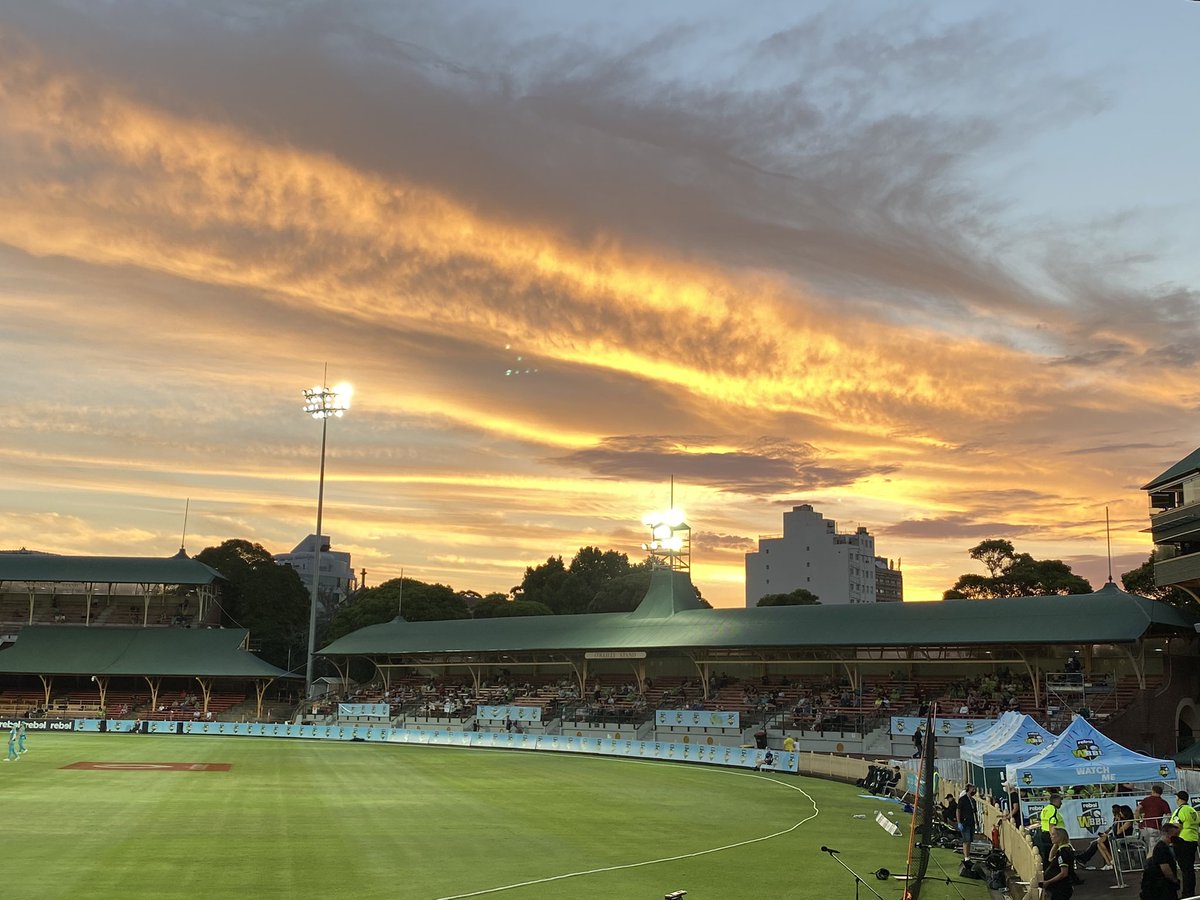 10th over: Sydney Thunder 66-2 (Knight 16, Haynes 12) Haynes plays her best shot of the innings, using her feet and hitting Kerr over mid-off for a lovely boundary. The leggie responds well, mixing her length to the batters, to concede just two more runs in the over. Midway point. Drinks.

9th over: Sydney Thunder 60-2 (Knight 15, Haynes 7) A nice paddle sweep from Knight off Jonassen beats the infield and earns the batter two runs. Haynes completes the over with a controlled loft over the bowler’s head that picks up two more.

8th over: Sydney Thunder 54-2 (Knight 11, Haynes 5) Kerr on now with her leg breaks. The Thunder continue to live dangerously between the wickets but the Heat continue to allow it, this time D Kimmince missing an attempted direct hit that would have sent Haynes packing.

7th over: Sydney Thunder 52-2 (Knight 10, Haynes 4) Haynes strolls to the middle. What the Heat wouldn’t give to get her cheaply. A couple of leg-side wides from Harris does little to pressurise the new batter but the Thunder do a good job at making hard for themselves as a quick single very nearly does for Knight at the striker’s end. But she survives and cashes in with a boundary off the last ball of the over.

6th over: Sydney Thunder 41-2 (Knight 5, Haynes 0) Hancock returns after that good first over of hers. She entices a rare false shot from Beaumont, who swings and misses at one outside off stump. And then entices another one that sends the opener on her way, a premeditated paddle off a slower ball that she lofted into the hands of short fine-leg. Soft way to end a blustery dig. Excellent bowling. Hancock saw the shot coming and delivered appropriately. The power play ends. Hard to know who’s on top.

5th over: Sydney Thunder 40-1 (Beaumont 27, Knight 4) D Kimmince is back for more. Knight manages to keep out a dangerous-looking away-swinging yorker but otherwise the batters are untroubled in picking her off for ones and twos – and, to finish the over, another Beaumont boundary that she collects on the full and chips over mid-on.

4th over: Sydney Thunder 32-1 (Beaumont 22, Knight 1) Beaumont is seeing them like beach balls in these opening overs. A couple more boundaries – one through point and one cracked over midwicket – make it five so far in her innings. Safe to say the loss of Trenaman is doing nothing to quell her urgency.

3rd over: Sydney Thunder 22-1 (Beaumont 13, Knight 1) Jonassen on at the other end. The leftie generally keeps it tight save for a ripping Beaumont drive that whistled past mid-on en route to the fence.

2nd over: Sydney Thunder 14-1 (Beaumont 8) Hancock at the other end and Trenaman joins her batting partner in getting off the mark with a four, a thick edge that flew to the third-man fence. A good response from Hancock with a couple of yorkers before dropping in a short one that Beaumont went after … and very nearly picked out the fielder at fine-leg. But, oh boy, an eventful over finishes eventfully as the batters set off for, but then think better of, a quick single that leaves Trenaman stranded at the striker’s end as L Kimmince dislodges the bails with a direct hit. Confusion between the wickets. The great killer. 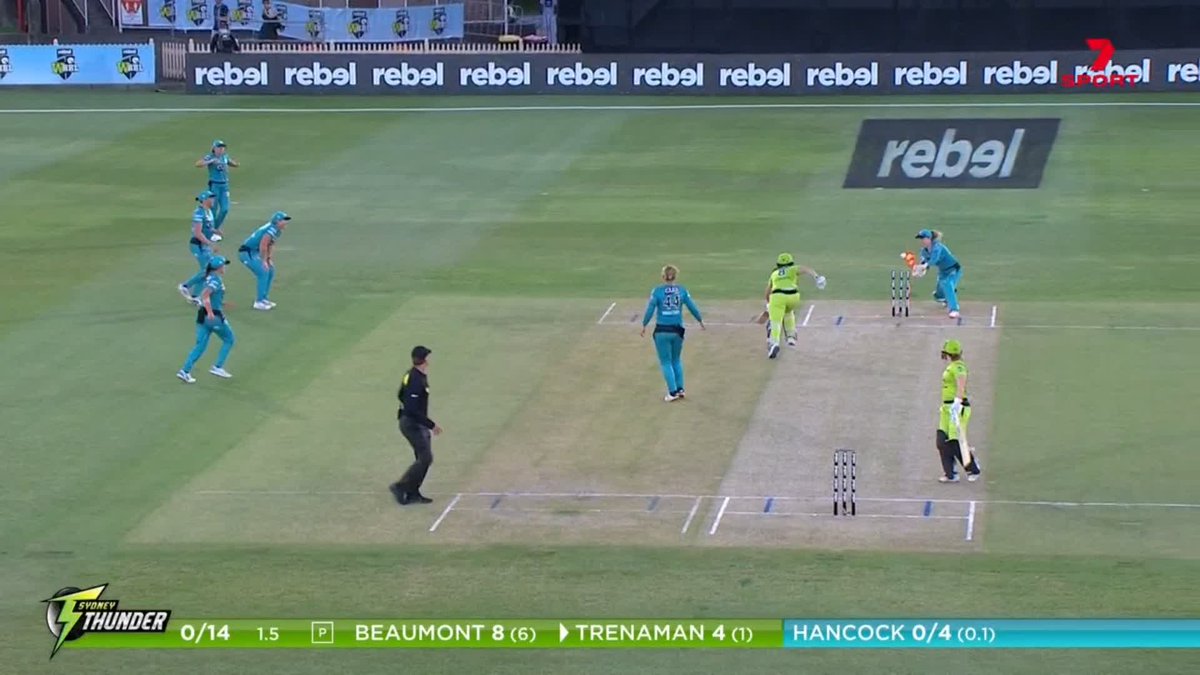 The mix up and the direct hit from Laura [email protected] have their first wicket #WBBL06 pic.twitter.com/b2N4re5qdu

1st over: Sydney Thunder 8-0 (Beaumont 8, Trenaman 0) D Kimmince has the new ball for the Heat. Second ball, Beaumont get son one knee, waits for it, and paddle sweeps to the fence. Total premeditation, total class. Her next scoring shot is not so classy but just as effective as she bottom edges an attempted cut which beats the keeper and races to the boundary. The pitch looks very dry, possibly slower than last night. Word is no water has been put on it in the past 24 hours. And today was a scorcher in Sydney.

Speaking of the Heat’s batting depth beneath Redmayne et al, Laura Kimmince can sure hit ‘em. Her strike rate this campaign had escaped me so thanks @stat_doctor *

* Not a real doctor

Laura Kimmince and some blinders this season:

Looking forward to seeing what Shabnim Ismail can do with the ball for the Thunder tonight. Ismail went through the Hurricanes like a wrecking ball last Sunday and could conceivably do the same against a Heat top-order that has been good this season, but not impregnable. Georgia Redmayne hasn’t exactly been a surprise packet this year, but her Heat-topping 332 runs is a personal best and have gone some way to filling the giant void left by Beth Mooney’s departure. The Heat, of course, run deeper than one woman but Ismail v Redmayne could be a pivotal contest at the head of affairs.

Shabnim Ismail’s pace has been setting the tone for the @ThunderBBL bowling attack, while Heather Knight and Rachael Haynes have been all class with the bat!

Can they beat the Heat tonight and score a spot in Saturday’s final? #WBBLFinals pic.twitter.com/9Km907gO2I

Okay, one last post on yesterday’s game before we move on. If you missed Heather Graham’s supernatural leg-cutter to get rid of Meg Lanning, get out from under that rock and do yourself a favour. 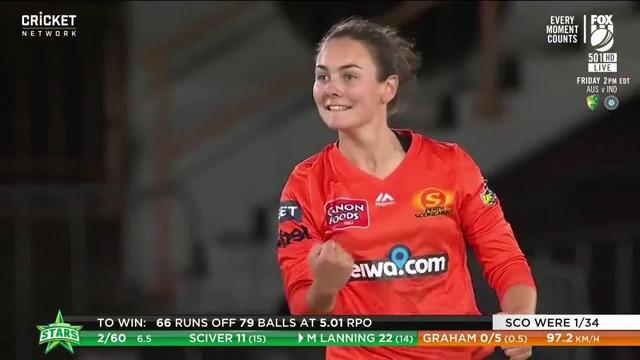 A look at Heather Graham’s brilliant ball from all angles! #WBBL06 pic.twitter.com/JLcZwC7AJX

Before we embrace the present, let’s hark back to the past … yesterday. The Stars were so very, very good in their win over the Scorchers, and worryingly for tonight’s winner look to have room for improvement. One of the great takeouts of the match was the number of eyeballs that saw Alana King, Nay Sciver and cohorts strut their stuff. The appetite is there and it’s getting hungrier.

Hancock returns for the Heat in place of Sippel. Thunder unchanged.

Tune in from 7pm on 7mate! #WBBL06 pic.twitter.com/U0XrWx2kxa

Hello and welcome to our live coverage of the WBBL second semi-final at North Sydney Oval. The prize on offer here is a berth in the final and a date with Melbourne Stars, who were highly impressive in their seven-wicket dispatch of Perth Scorchers at the same venue yesterday. For Brisbane Heat, victory tonight will keep alive their bid for a record third successive WBBL title. Sydney Thunder, the competition’s inaugural champions, are pursuing a victory that will advance them to the decider for the first time since that triumph in 2015-16.

The Heat enter this knockout contest in the rudest of health, having won seven consecutive games to turn around an indifferent start to the campaign. The Thunder are also in good touch with three victories from their past four attempts. Honours were split during the regular season, with the Thunder drawing first blood in a rain-affected fixture before the Heat hit back with a comfortable eight-wicket triumph that kickstarted their winning streak.

Looking forward to this one. Every chance it will be a close encounter. If you’d like to get involved, drop me an email or tweet @scott_heinrich. 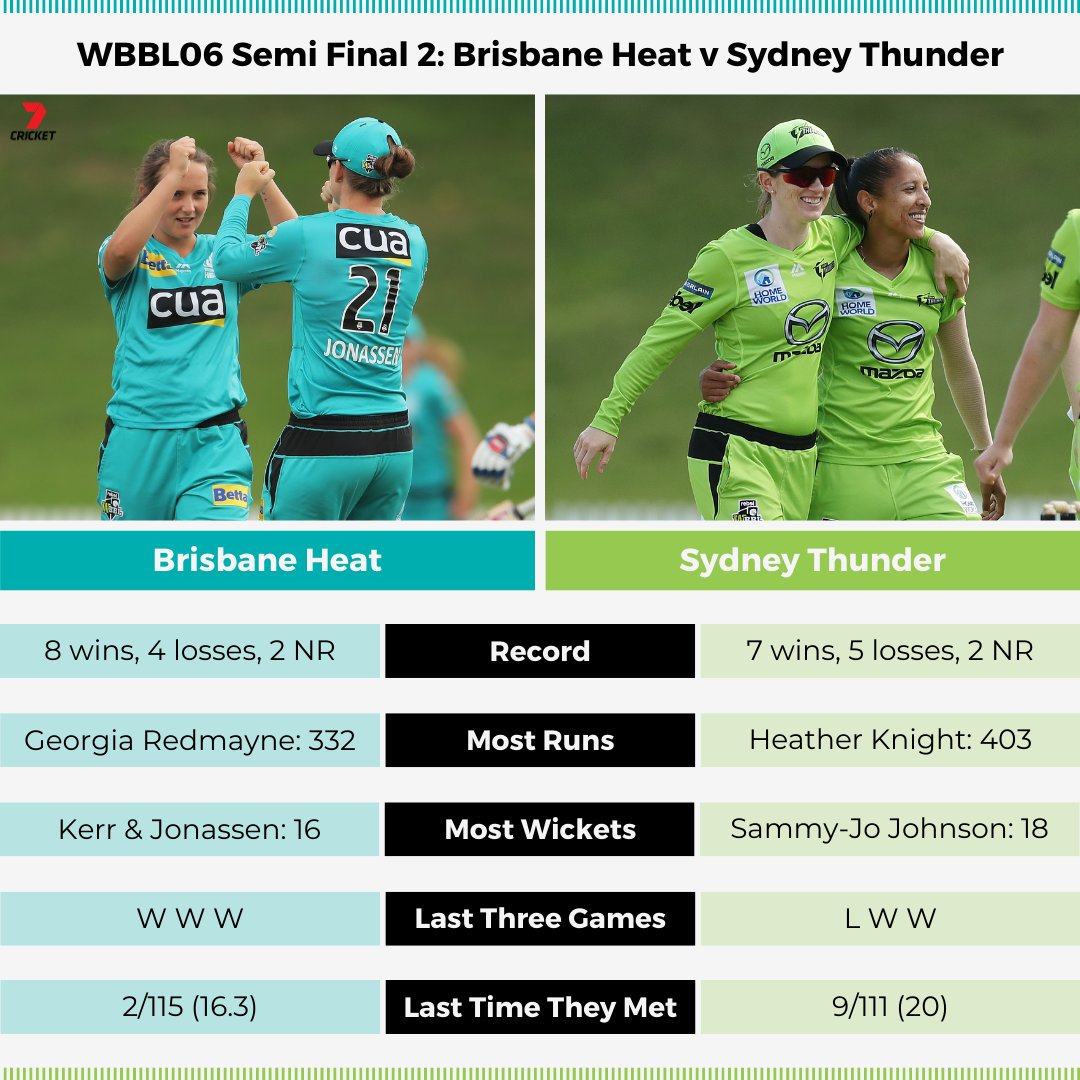 Who will join the Stars in the #WBBL06 Final? 🤔