If I may intersperse the sad news with something slightly less traumatic: major retailers in South Korea are reporting that they have run out of plastic sledges as the nation takes up sledging in record numbers.

Competitor Lotte Mart said sales of sledges in the first six days of January were up more than six-fold from the same period last year and is also completely out of stock.

One family that visited the Olympic Park in Seoul said they had to bring picnic mats for their children to slide on. “We tried to buy sledges yesterday but couldn’t find one, so we brought these mats as substitutes. It’s still great that our kids can enjoy sledding and that we have a place near home where it can replace the sledding parks,” said Joe Choong-hyun, a father of two boys. 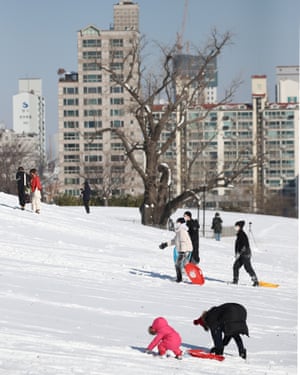 A photo of a person snowboarding on a snow covered road in the middle of Seoul went viral on Twitter, while a Youtuber who posted a video of himself skiing around his town scored nearly 43,000 views.

Ski resorts resumed business earlier this week but only with limited capacity and operating hours, following a cluster of infections at a resort in Pyeongchang county, site of the 2018 Winter Olympics.

The British transport secretary, Grant Shapps has said there are concerns about how effective the Covid-19 vaccines are against the highly transmissible variant of the coronavirus discovered in South Africa.

“There are concerns that the South African one in particular
– about how effective the vaccine would be against it – so we simply cannot take chances,” Shapps told Sky.

His comments appear to contradict a not-yet peer reviewed study into the Pfizer Inc and BioNTech’s Covid-19 vaccine, which found the vaccine was effective in protecting against a key mutation in the highly transmissible new variants of the coronavirus discovered in the UK and South Africa.

The laboratory study conducted by the US drugmaker Pfizer and scientists from the University of Texas Medical Branch indicated the vaccine did neutralise viruses with the so-called N501Y mutation of the spike protein.

The mutation could be responsible for greater transmissibility and there had been concern it could also make the virus escape antibody neutralisation elicited by the vaccine, said Phil Dormitzer, one of Pfizer’s top viral vaccine scientists.

Coronavirus infections in Ukraine began rising again in September and have remained relatively high, . is reporting. The nation of 41 million has registered more than 1m coronavirus cases with 19,588 deaths as of 8 January.

The new measures, which include the closure of entertainment centres and a ban on mass gatherings, will be in force until 24 January.

Despite calls to ease or cancel the lockdown, which was decided in early December, President Volodymyr Zelenskiy and health minister Maksym Stepanov have said the restrictions were urgently needed ahead of the usual seasonal flu period.

The number of new cases dropped in early January and this, together with the decision to leave public transport and some non-critical businesses operating, prompted local authorities and businesses to criticise the new restrictions.

The government says imposing restrictions now may help avoid the need for a stricter lockdown later that could do greater damage to the economy.

Ukraine’s economy is expected to contract by about 5% in 2020, dragged into recession by the coronavirus pandemic and a strict lockdown in March.

More than 4,000 people died in the US on Thursday, Johns Hopkins University data shows – a world record daily toll, and the first time it has passed 4,000.

The virus is surging in several states, with California hit particularly hard, reporting on Thursday a record two-day total of 1,042 coronavirus deaths. Skyrocketing caseloads there are threatening to force hospitals to ration care and essentially decide who lives and who dies.

“Folks are gasping for breath. Folks look like they’re drowning when they are in bed right in front of us,” said Dr Jeffrey Chien, an emergency room physician at Santa Clara Valley Regional Medical Center, urging people to do their part to help slow the spread. “I’m begging everyone to help us out because we aren’t the front line. We’re the last line.”

Meanwhile, the number of Americans who have had their first shot of the Covid-19 vaccine climbed to at least 5.9 million on Thursday, a one-day gain of about 600,000, according to the Centers for Disease Control and Prevention. Hundreds of millions will need to be vaccinated to stop the coronavirus.

That’s it from me, Helen Sullivan, for today. Thanks for following along. Amelia Hill will now bring you more pandemic news.

Australia has turned the screws on the Covid-19 super variant by reducing arrival caps, mandating masks and pre-departure tests for returning travellers, and requiring more regular testing for air crews and quarantine staff.

The measures were announced by Scott Morrison after national cabinet on Friday, as the Queensland government announced a three-day lockdown of Brisbane to deal with the first community case of the more infectious variant:

British consumers spent a record £9bn on entertainment last year as the pandemic fuelled a boom in the popularity of digital services such as Netflix, Amazon and Spotify while the public sought to alleviate lockdown boredom:

Here are the key developments from the last few hours:

The world’s poorest countries can expect to start receiving their first Covid-19 vaccine doses between the end of January and mid-February, the World Health Organization said on Thursday. Vaccination is already under way in some of the world’s wealthiest nations, including the US, Britain, European Union countries and Canada.
Brazil passed 200,000 deaths from the coronavirus pandemic Thursday. That is the second highest total in the world. The health ministry said the country had 1,524 deaths in the previous 24 hours, rising to a total of 200,498 for the pandemic.
Australian city enters lockdown after UK strain detected. Australia’s Queensland state enforced a three-day lockdown in the city of Brisbane from Friday evening, after a hotel quarantine worker tested positive for the more contagious variant of Covid-19 that emerged in Britain last month.
Sinovac vaccine 78% effective in Brazil trial, experts call for more details. A coronavirus vaccine developed by China’s Sinovac Biotech was 78% effective in a late-stage Brazilian trial with no severe Covid-19 cases, researchers said on Thursday, although a lack of data details stirred calls for more transparency.
Arrivals to UK will need to show a negative Covid test before entry. International travellers will need to show a negative Covid-19 test before being allowed into the UK, the government has announced, in a significant toughening of border controls to try to stem the spread of new coronavirus variants.
China reports 53 cases, down from day before as it seals city. The number of new Covid-19 cases reported in China’s Hebei province surrounding Beijing fell slightly from a day earlier, as authorities barred people in the provincial capital from leaving in order to curb the spread of the disease. China has sealed off Hebei’s Shijiazhuang, a city of several million in Hebei province whose surrounding areas take the total population to 11 million.
US faces deadly post-holiday phase of pandemic: Fauci. Anthony Fauci, the top US infectious diseases expert, has warned the country faces the prospect of continued mass deaths from the Covid-19 crisis, predicting the situation there will worsen before it gets better. The US faced its deadliest month of the pandemic in December, and continues to post record death figures, including a record 3,854 deaths on 6 January alone.
Pfizer vaccine protects against new UK and South African strains – research. Research suggests that Pfizer’s Covid-19 vaccine can protect against a mutation found in two contagious variants of the coronavirus that erupted in Britain and South Africa.

New research suggests that Pfizer’s Covid-19 vaccine can protect against a mutation found in two contagious variants of the coronavirus that erupted in Britain and South Africa, AP reports.

Those variants are causing global concern. They both share a common mutation called N501Y, a slight alteration on one spot of the spike protein that coats the virus. That change is believed to be the reason they can spread so easily.

Most of the vaccines being rolled out around the world train the body to recognize that spike protein and fight it. Pfizer teamed with researchers from the University of Texas Medical Branch in Galveston for laboratory tests to see if the mutation affected its vaccine’s ability to do so.

They used blood samples from 20 people who received the vaccine, made by Pfizer and its German partner BioNTech, during a large study of the shots. Antibodies from those vaccine recipients successfully fended off the virus in lab dishes, according to the study posted late Thursday on an online site for researchers.

The study is preliminary and has not yet been reviewed by experts, a key step for medical research.

But “it was a very reassuring finding that at least this mutation, which was one of the ones people are most concerned about, does not seem to be a problem” for the vaccine, said Pfizer chief scientific officer Dr. Philip Dormitzer.

More now on China sealing off a large city near Beijing, cutting transport links and banning millions of residents from leaving, as authorities move to stem the country’s largest Covid-19 outbreak in six months.

The pandemic has so far broadly been brought to heel by Chinese authorities since its emergence in Wuhan in late 2019, with small outbreaks swiftly snuffed out with mass testing, local lockdowns and travel restrictions.

Around 100 new Covid-19 cases have been discovered in the past week in Shijiazhuang, a city of several million in Hebei province whose surrounding areas take the total population to 11 million.

All vehicles and residents were banned from leaving the city and train services suspended, authorities announced late Thursday. 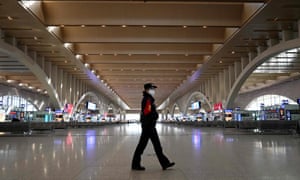 Footage from state broadcaster CCTV showed residents being swabbed by medical workers in hazmat suits at community centres in Shijiazhuang while queues outside stretched around the block.

Virus control staff stood guard at highways entering the city, which had mostly been blocked by barricades, the images released on Thursday showed.

Hebei province reported 33 new confirmed Covid-19 cases on Friday in addition to 51 from the day before – pushing the nationwide daily total to the highest figure in five months.

The vast majority of the infections were found in Shijiazhuang.

Footage from state broadcaster CCTV showed residents being swabbed by medical workers in hazmat suits at community centres in Shijiazhuang while queues outside stretched around the block.

Virus control staff stood guard at highways entering the city, which had mostly been blocked by barricades, the images released on Thursday showed.

Hebei province reported 33 new confirmed Covid-19 cases on Friday in addition to 51 from the day before – pushing the nationwide daily total to the highest figure in five months.

The vast majority of the infections were found in Shijiazhuang.

Hi, Helen Sullivan back with you now after blogging US politics for a while.

As always, you can find me on Twitter here if you have questions or comments or want to see some retweets of other people’s good jokes.