60 min: Aubameyang runs on to a ball from deep down the inside left and tries to lift it over the onrushing Dubravka asnd steer it goalwards with the outside of his right boot. He succeeds in the first part of his fiendish plan, but not the second as his shot is weak and off target.

59 min: Newcastle are having the better of this second half, but a promising attack breaks down when Emile Krafth overhits a cross from the left.

56 min: Newcastle win a free-kick wide on the left. Matt Ritchie overcooks his delivery towards the far post, where David Luiz can only half-clear. Kieran Tierney fails to boot the ball clear with any conviction and Jeff Hendrick drives the ball into the mixer.

It’s on a plate for Andy Carroll, who steers the ball wide when it looked way easier to score. He’s flagged for offside but replays show he wasn’t.

55 min: Andy Carroll gives Bernd Leno a fright with an instinctive shot that takes a deflection. The goalkeeper saves comfortably.

53 min: In dire need of some cutting edge, Arsenal send Emile Smith-Rowe to warm up. Despite his inexperience, he has shown enough in recent games to suggest he might be just the man to pick the lock of Newcastle’s defence.

51 min: Nicolas Pepe shoots from distance, but doesn’t trouble Dubravka with a feeble effort that bounces wide of the right post.

48 min: Joe Willock conedes a free-kick about 30 yards from his own goal for a foul on Jeff Hendrick. It’s a routine from the training ground and Newcastle get the ball to Carroll, who heads wide from a long way out.

47 min: Arsenal free-kick, wide on the right, in line with the edge of the Newcastle penalty area. Pepe curls the ball across the face of goal, where Ciaran Clark heads the ball straight up in the air. It goes wide off an Arsenal player … Kieran Tierney, I think.

46 min: Play resumes after a first half which passed quickly enough without either team playing particularly well. BBC pundits Alan Shearer and Ian Wright were both highly critical of their respective former teams, but Arsenal were undoubtedly in the ascendency.

Newcastle substitution: Matt Ritchie is on for Jamaal Lascelles. Paul Dummett moves to the left of Newcastle’s three central defenders and Ritchie takes up his spot as left wing-back.

Peep! The deadlock remains unbroken but Arsenal have been very much in the ascendency. They’ve forced several saves out of Martin Dubravka in the Newcastle goal, while his Arsenal counterpart Bernd Leno has had nothing to do.

45+1 min: On a scampering run through midfield, Almiron is pulled back by Cedric, who gets booked for his troubles. Free-kick for Newcastle, about 40 yards from the Arsenal goal. Sean Longstaff curls the ball towards Andy Carroll but it’s out of reach for the big man.

43 min: Relentless pressure from Arsenal, who are lacking somebody to make that killer pass that could put Newcastle in all sorts of bother.

Newcastle are to be commended on their disciplined defending, with Arsenal’s main source of danger being Ciaran Tierney and his crosses and pull-backs into the box from the left wing and byline.

41 min: Pepe takes the corner short, playing a give and go with Willian. Arsenal end up forcing another save out of Dubravka who concedes another corner. Nothing comes of this one, with Newcastle clearing the ball after Arsenal had pressed and probed around the edge of their area.

40 min: Another Arsenal corner, with Dummett putting the ball out again, this time during a tussle with Cedric.

38 min: Another delivery into the Newcastle box from deep is claimed confidently and comfortably by Martin Dubravka, who’s having a good game following his recall for this Cup tie.

38 min: Willian’s delivery from the corner flag is headed clear by Joelinton.

37 min: Paul Dummett heads a Ciaran Tierney delivery into the Newcastle penalty area out for a corner.

35 min: The camera cuts to the stands, where Gabriel Martinelli, who got injured in the warm-up, is opening a protein bar.

33 min: Good defending from Isaac Hayden after Pepe and Aubameyang combine well down the right. The Newcastle defender dispossesses Pepe with a well timed tackle near the edge of the Newcastle six-yard box, but his opponent made it easier for him by taking one touch too many when perhaps he should have squared the ball.

32 min: Kieran Tierney gets the better of Miguel Almniron and curls a cross into the Newcastle penalty area. Jamal Lascelles despatches back down the field with a firm header.

30 min: In her role as referee’s assistant, Sian Massey-Ellis incurs the wrath of Joelinton for signalling a goal kick for Arsenal when he thinks it should have been a corner.

28 min: Reiss Nelson eschews the opportunity to shoot first time from seven or eight yards out after being teed up by a wonderful Kieran Tierney pull-back. His indecisive dithering costs him and the ball ends up being smothered by Martin Dubravka. Arsenal should be one up.

26 min: Andy Carroll gets booked for catching Joe Willock on the side of his head with an elbow as he leapt to contest a high ball with the Arsenal midfielder. His eyes were on the ball and there was zero intent, but referee Chris Kavanagh quite literally marks his card.

25 min: Dubravka pulls off an excellent save from Aubameyang, who’d been played in behind down the inside right by an excellent long pass from David Luiz. The ball breaks to Willian, who sizes up the sitiuation, takes aim and fires … high over the bar. 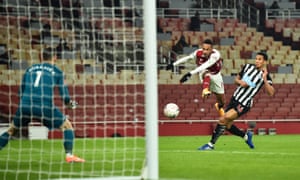 Aubameyang can’t get the better of Dubravka. Photograph: Glyn Kirk/./.

24 min: Another Newcastle throw-in, in line with the edge of the Arsenal penalty area. Sadly, they don’t seem to have anyone capable of Delaping the ball long into the penalty area and nothing comes of it.

20 min: Joelinton beats Joe Willock in midfield and canters towards the Aersenal penalty area. He plays the ball wide to Andy Carroll, whose shot is deflected up in the air and cleared. It’s early yet, but Joelinton looks like a man who is playing with no confidence whatsoever. His pass to Carroll was both indecisive and inaccurate.

19 min: A poor touch from Willock puts the ball out for a Newcastle goal-kick, which Martin Dubravka seems in no great hurry to take. He eventually boots the ball far down the field and within seconds, it’s back at his feet.

16 min: After an entertaining opening 10 minutes, the game has become a little more turgid. Not much of note to report at all. Cedric does seem to have hurt his knee, but is soldiering on.

13 min: Arsenal continue to dominate possession, patiently Arsenaling the ball around to little good effect until Cedric is penalised for offside.

10 min: Reiss Nelson fails to control a good Nicolas Pepe ball into the Newcastle penalty area after some excellent build-up play from Arsenal. The ball bounces wide, but with a better touch he could have set himself for a shot on goal from 10 yards out.

7 min: Ciaran Clark clips the ball skywards towards the edge of the six-yard box, trying to pick out Andy Carroll. After a period of sustained Newcastle pressure, Arsenal break on the counter and Jamaal Lascelles takes out Reiss Nelson with a scything tackle that earns the Newcastle skipper a yellow card.

7 min: Jeff Hendrick sends a cross into the Arsenal penalty area from the left. Pablo Mari sends it packing with a thumping header.

5 min: Paul Dummett fouls Nicolas Pepe, giving Arsenal a free-kick about 25 yards from the Newcastle goal, a little to the right of the D. Willian drives the ball straight into the defensive wall. A very poor knee-high effort from the Brazilian.

4 min: Playing his first ever FA Cup match, Bernd Leno gets a touch, gathering a low cross from the left.

2 min: Nicolas Pepe tries his luck from distance, bringing another save out of Dubravka. Nothing spectacular required from the Newcastle goalkeeper, but he’s been busy in these very early stages.

1 min: Late call-up Reiss Nelson cuts in from the left and unleashes a low shot that forces Martin Dubravka to make an early save.

1 min: Newcastle get the ball rolling, their bench a little light after Jonjo Shelvey and Callum Wilson were withdrawn from their squad this morning for unspecified reasons that may or may not be related to Covid-19.

Martinelli is out. The footage of Martinelli’s injury does not look at all good – I think he’s wrenched his knee. He’s been taken out of Arsenal’s starting line-up and will be replaced by Reiss Nelson.

Great news for Arsenal fans: Gabriel Martinelli has managed to injure himself during a game of rondo in the warm-up, over-stretching himself to try to keep possession of the ball and doing himself some sort of mischief. He’s receiving treatment but it doesn’t look good.

Newcastle: It’s quite a gung-ho line-up from Steve Bruce, who starts with a classic … er, Big Man-Big Man partnership of Andy Carroll and Joelinton up front.

Having been passed fit by the doctors after recovering from a bad dose of Covid-19, Jamaal Lascelles is back in the side and will wear the captain’s armband. 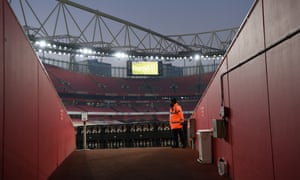 A steward mans his post at an empty EMirates Stadium. Photograph: Andy Rain/EPA

Arsenal: There’s no place for Runar Runarsson in goal for Arsenal, following the error he made when given a chance against Manchester City in the League Cup. He’s on the bench, with Bernd Leno starting between the sticks.

Mikel Arteta does make seven changes, affording some of the senior players who have let him so down badly this season an opportunity to redeem themselves (or let him down again), while giving other fringe players a run-out.

Cedric and David Luiz start in defence, while Mohamed Elneny and Joe Willock are in the centre of midfield. Willian, Pierre-Emerick Aubameyang, Nicolas Pepe, and Gabriel Martinelli also come in. 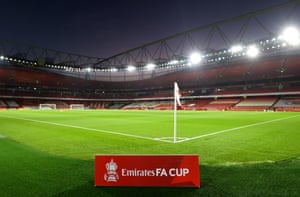 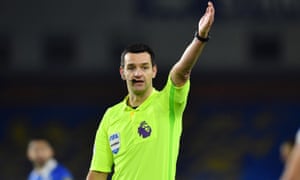 Chris Kavanagh will be the man in the middle for tonight’s match between Arsenal and Newcastle. Photograph: Glyn Kirk/.

Allan Saint-Maximin (Covid), Jamal Lewis (knee) and Ryan Fraser (groin) remain sidelined for Newcastle, while Jamaal Lascelles is in line for a recall as he recovers from the delilitating effects of the Covid-19 virus, which has kept him out since November.

For Arsenal, Gabriel will miss out after testing positive for Covid, but Thomas Partey is expected to return from his latest injury set-back.

Alex Runarsson, Cedric Soares, Ainsley Maitlanbd-Niles and Joe Willock are among a host of reserves and fringe players who could get a run out this evening. 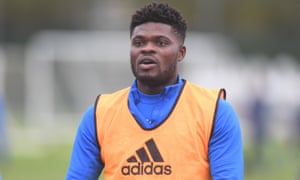 Thomas Partey is back from injury and expected to play against Newcastle tonight. Photograph: Stuart MacFarlane/Arsenal FC/.

Holders Arsenal begin their defence of the FA Cup with what, on paper at least, looks like a reasonably straightforward home tie against a woefully out-of-sorts Newcastle.

In 15th place in the Premier League and on the slide, Newcastle are expected to make what are known in football parlance as “wholesale changes”, while it would be no surprise to see Mikel Arteta give some fringe players a run-out this evening.

Kick-off at the Emirates Stadium is at 5.30pm (GMT) but stay tuned in the meantime for team news and build-up.