Mikiiya Foster wasn’t quite prepared for what was waiting for her when she arrived at the corner of Sycamore and Cochran on Saturday, June 6.

It had only been eight days since the 18-year-old recent high school graduate first had the idea to organize a Black Lives Matter protest in her hometown of Simi Valley, Calif., a suburb outside of Los Angeles. Chatter around town—which was home to the infamous Rodney King trial and remains traditionally known for its conservative politics—and on social media hadn’t been especially favorable towards the idea of the march. Businesses has boarded up in fear of the destruction that had occurred some 40 miles away in L.A. The chances were high that turnout might be low.

« I had made a comment saying like, you know, ‘Even if there’s only three people, I’ll still be there,' » Foster told E! News exclusively of her mindset leading up to the event.

And yet, when she arrived at the intersection that stands almost smack-dab in the center of town, a different story entirely was waiting to be told.

A crowd had begun to swell, filling the street they’d soon be marching down. Final estimates of the size totaled over 2,000. « I couldn’t believe it, » she admitted. « I mean, in the beginning of the protest, I honestly couldn’t see how far back it went because I was up near Chase Bank, so I could only see that small corner. That itself I was just like, ‘Oh my God. What is happening? Did I do this? How did I?' »

How did an 18-year-old with no prior experience in community organizing—whose prom and graduation were canceled amid COVID-19—inspire with such force a community that’s left her feeling, as she said, « like an outsider. »

It all started, she told E!, with an off-handed comment on FaceTime. 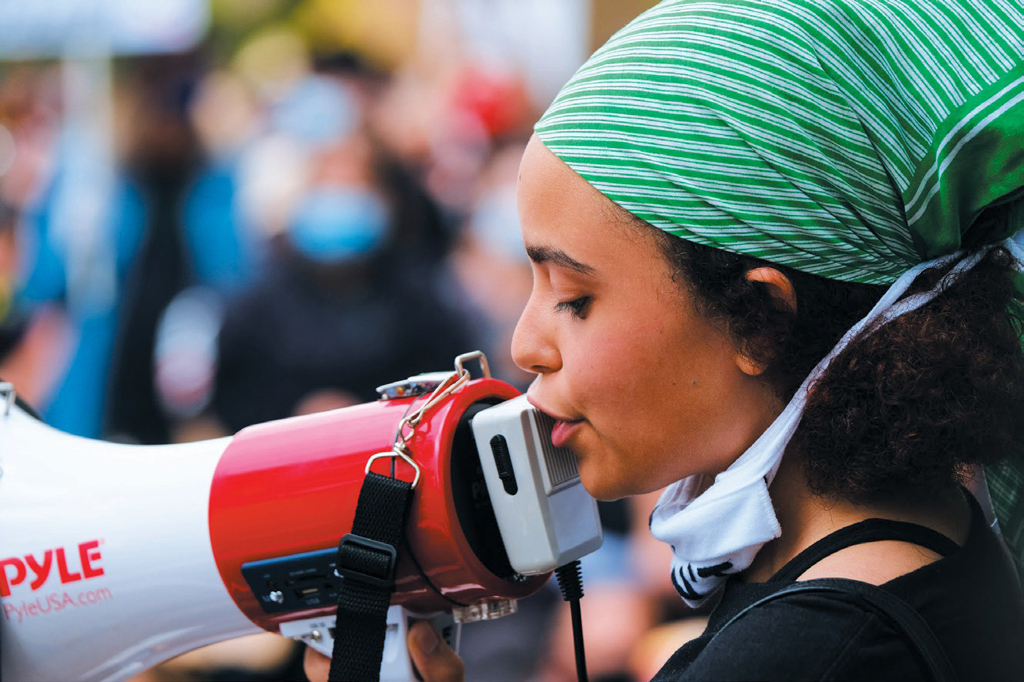 « I was honestly just on FaceTime with one of my friends, Alyssa Brown, and I was like ‘You know what, we should do a protest in Simi,' » Foster said. « And she was like, ‘Why are you still talking to me? Go plan it.' »

She’d only ever been to one protest in her life up until that point—for the environment—but she knew she wanted to take action at home just as people were doing all over the country. « What happened to George Floyd, Ahmaud Arbery, and Breonna Taylor has been happening to black people for forever, » Foster explained. « I don’t think it was necessarily like this new thing happened. It was more so just this built up fact of this happening over and over again, and me always feeling like I couldn’t do anything. Like I was too young. »

It was only after she attended a protest in L.A.’s Pan Pacific Park that she became resolute in her plan to take action.

« That definitely did help with that feeling of empowerment, » Foster said. « Just feeling that unity, that we all have that one common goal and we’re all here to support one another, was very helpful [in] keeping myself motivated, even when I was being threatened or there were certain people saying that I shouldn’t do it. »

It certainly didn’t hurt that she’s been drawing on Grown-ish actress and activist Yara Shahidi as her « number one inspiration. » As Foster explained of her affection for Shahidi, « Yara has always been very outspoken and never shies away from the camera when people start asking ‘difficult questions.’ She uses her platform to bring light to the injustices Black people go through and empowers the Black community and younger generation to become more involved. She even founded her own summit to bring together young activists in the community and vocalize the importance of voting. »

After casually shooting off a tweet— »‘Protest in Simi? I’m in' » or something like that, » she recalled—prompted more reaction than she was expecting, she, Brown, and a few other friends got to work on the simple logistics of when and where and mocked up a flier. Once the visual began circulating, she was contacted by Ruth Luevanos, a member of the Simi Valley City Council. 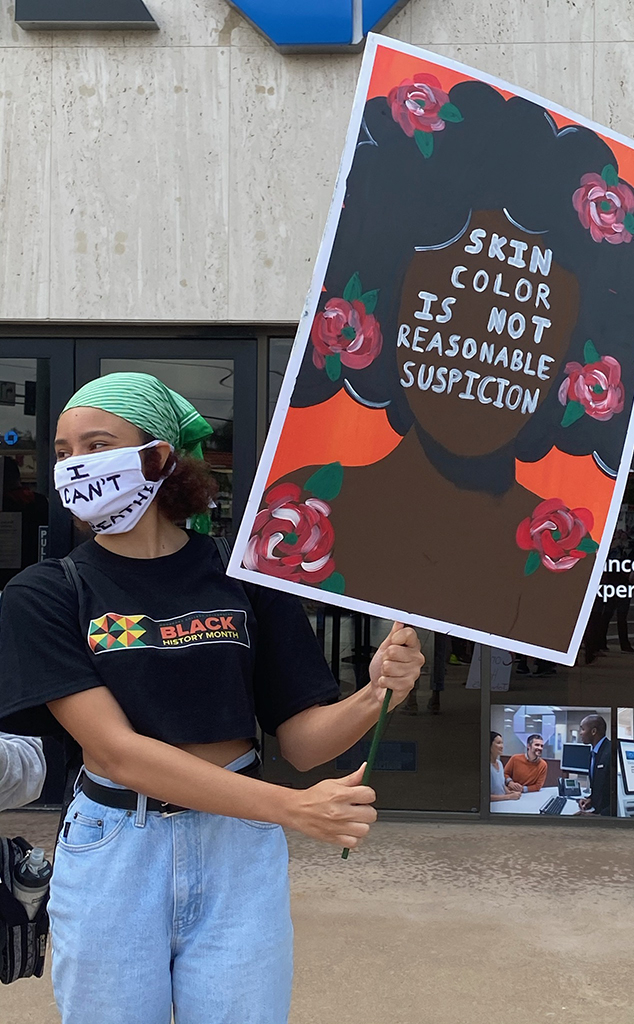 Foster said Luevanos wanted to show her support, telling the organizer she thought Foster was « doing a great thing. » It was through the council member, she added, that Foster « was able to meet a bunch of different other community leaders and community organizers that eventually did help me make Saturday happen. »

Not everyone was as supportive as Luevanos, however. After emailing the entire City Council, as well as the town’s mayor, chief of police, and school board, to « give these public officials a chance to be involved in the community and, you know, let our voices truly be heard to people that oftentimes are the ones making decisions on specific things going on in the city, » Mayor Pro Tem Mike Judge made public her letter and his response to it without receiving Foster’s consent.

In his response, as reported by local paper Ventura County Star, Judge wrote that he was « hard pressed to find one example of a truly peaceful protest, » and that « almost all of the protest to date, have turned to violence and destruction. » He then asked her to « reconsider this protest march, and call it off. »

As Foster explained, « Under his original post…a lot of the comments were honestly in support of me and saying like how inappropriate that was of him. Her social media, however, was a different story. « There [was] a lot of people saying, ‘We’re not going to let you in Simi Valley’ and one person even said, ‘You’re going to find out what an AR-15 looks like close up…I had been getting a little bit of that before he had posted it, but obviously since everyone knew that it was me now, and my name is so unique, I think that did give my social media a lot more traction and attention to some interesting people to say the least. »

Judge and the City of Simi Valley have yet to return E! News’ request for comment, however the Ventura County Star reported on June 4 that Judge said he posted the exchange « for transparency. » The report continued, « He also said that since she used his city email address, the email was a public record and that her name was already out on social media as one of the protest organizers. »

Despite the threats going so far as to include a claim that someone had « found my address, my phone number and pictures of my family, » Foster remained committed to the cause. After talking it over with her mom, Leslie Foster, she was reminded of her family’s history in the fight for civil rights. « Her parents…were part of CORE [Congress of Racial Equality] back in the ’60s, » she shared, referencing her maternal grandparents. « My grandpa marched with Martin Luther King Jr. and…they had heard worse than I had and they kept going and kept going. So that really helped me keep that motivation. »

« The people that are saying all of these things are just proving to me that this does need to happen because there’s a lot of people in Simi who feel how I do and who did feel isolated in elementary and middle and high school, » Foster continued, « and who are really going to have a positive impact from the sort of unity that would come out of Saturday. »

Despite the fears, threats and boarded-up businesses, which Foster admitted probably had « an impact on people who are already kind of scared to come, » she and her group of volunteer-based « peacemakers » did just that: hosted a march and subsequent rally, with a program of speakers, that resulted in zero incidents of violence and ended right on time.

Reception to the event has been overwhelmingly warm, Foster told E!. « There have been a lot of new people who will just DM me or message me or something, and it’s really so nice, » she explained. « I have such a hard time accepting it because they’ll say, ‘Thank you for putting this on. Our city needed it, it really helped empower the city.’ And I’m like, ‘Yeah, I know, but also, you don’t have to thank me.’ Most of the time I’ll just reply with, ‘Oh, thank you. That’s so sweet.’ But yeah, I’ve just received so much support. »

On top of the support, people have also begun asking what’s next. Her response? « I’m like, ‘Yes I’m thinking. I got you. We still have to be careful because of COVID-19, but we’re going to do something because this movement is far from done. »

As she ponders her next steps and prepares to attend UCLA in the fall, where she’ll study business economics and political science with a minor in global studies, Foster said, « I have always known that I will be involved in activism somehow, but am still learning exactly which way that will take form. »

For now, she hopes to encourage other people her age out there in small towns similar to Simi Valley who might be interested in following in her footsteps.

« I would say do it, » Foster said with a laugh. « Definitely know what you’re walking into because it’s a lot of work and I definitely wasn’t prepared. But as long as you have that strong support system—nine times out of 10, you’re not going to be the only person in that community who wants to do this and who wants something to change…Just do it. »